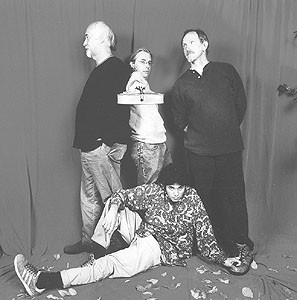 It began the way all good traditional music projects should: sitting around with good company and a full belly after a day of performing old-time fiddle tunes at a rural bluegrass festival. Master fiddlers Michael Doucet, Darol Anger, and Bruce Molsky knew of each other's work last summer as they settled in for an impromptu jam session after dinner at the Fiddle Tunes Festival in Port Townsend, Wash., but the trio had never had a chance to collaborate--until then. "The chemistry worked pretty good," recalls Doucet, during a phone interview from his home in Lafayette, La. "We just sat down together and started playing stuff. It felt good. If someone came up with something we all liked, we wrote it down."

Later that summer, the trio--joined by 22-year-old cellist Rushad Eggleston--reunited in Colorado for an intensive two-day session, "trying to figure out how this thing was going to work."

One year later, the recent release of Fiddlers 4's eponymous album--which Strings magazine has hailed as the debut of a "a true American vernacular string quartet"--already is garnering acclaim. Believe it, this is a fiddle supergroup to be reckoned with. Fiddlers 4 make their North Bay debut on April 11 at the Mystic Theatre and perform the following night at Freight & Salvage Coffee House in Berkeley.

Cajun fiddler Doucet is the driving force behind the Grammy-winning Beausoleil, the world's premiere Cajun band, and the Savoy-Doucet Cajun Band, who helped bring Louisiana regional folk music into the mainstream in 1986 with the Belizaire the Cajun soundtrack. Anger--violinist, fiddler, composer, educator, and producer--is a veteran of the David Grisman Quintet and a founding member of the jazz-oriented Turtle Island String Quartet. He also contributes to the virtuosic chambergrass groups Psychograss and Newrange. Molsky, dubbed the Rembrandt of Appalachian fiddling, is a brilliant old-time fiddler and living repository of mountain fiddle tunes. Eggleston, the first student admitted on a full scholarship to the Berklee College of Music string program, is a skillful improviser with an easy command of fiddle styles.

On their debut CD, Fiddlers 4 roam through a wide range of styles, from 1920s-era jazz to traditional Cajun tunes. But at their most adventurous, Fiddlers 4 transcend genre and fuse these far-flung influences into a complex mélange that merges chamber music and traditional American folk styles. That is perhaps best illustrated by Anger's original composition "African Solstice," a nod to the West African nation of Mali, birthplace of the blues. In the song (which Molsky describes as "a cycle of tensions"), the strings weave an arabesque puzzle, moving back and forth from a simple melody line to a quadruple counterpoint, and from elegant chamber-style playing to an edgy scratching sound before resolving in a breathy sigh.

"I think it's a very interesting project because everyone basically adapts to the other's style when they are playing or leading or whatever," says Doucet. "It's very different for me because I don't have a whole band to worry about like I do in Beausoleil. It's a very subtle kind of approach. There are more nuances; it's more expansive, and you get to play with time. I saw it as a way to honor some of the people who I learned from and to show the beauty and the potential of it in so many different layers.

"The beauty of Fiddlers 4 is that our motivation is very sincere, and it just works so well."