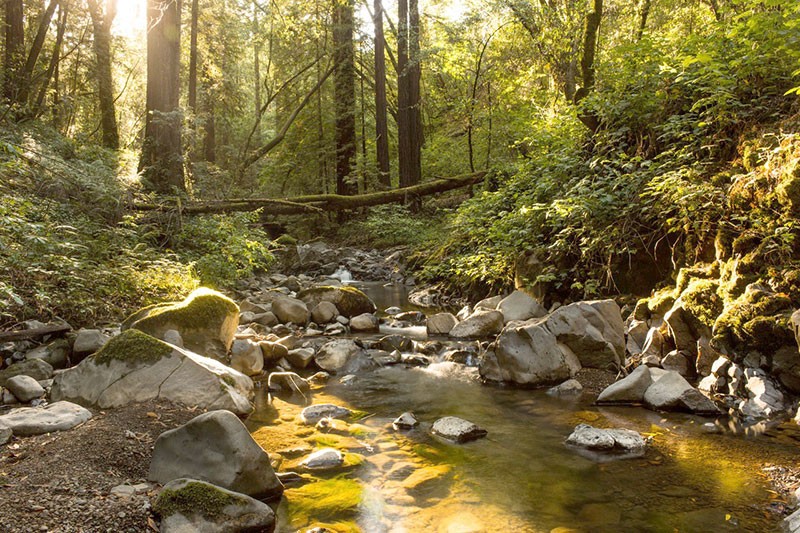 A Humboldt County businessman appears poised to get the green light from the California Department of Forestry and Fire Protection (Cal Fire) to log most of a forested 160-acre Healdsburg parcel crossed by Felta Creek.

Felta Creek is a tributary of the Russian River and one of a dwindling number of regional creeks where endangered wild coho salmon spawn.

Ken Bareilles' timber harvest plan (THP) has gone through two rounds of review at Cal Fire and awaits a proposed July 28 sign-off from the Santa Rosa regional office of the agency now reviewing public comments. Then it heads to Cal Fire director Ken Pimlott or his representative for a final approval, according to an online Cal Fire explainer detailing the THP process. Cal Fire forestry official Anthony Lukacic has been the agency's point-person through the process.

Bareilles says he has every expectation that Cal Fire will approve his THP, which will be executed by Redwood Valley logger Randy Jacobszoon. If they don't, he's suing Cal Fire. And if they do, a coalition of opponents has pledged to sue Cal Fire as well, to seek an injunction against the harvest.

The final sign-off is contingent upon the consideration of more than 70 public comments submitted to the THP by residents and an array of environmental and fisheries organizations concerned about the salmon. The fate of the coho are among an array of issues that have arisen as the plan has made its way through the approval process this year.

Dry Creek and its tributaries have been part of a federal-state program that set out to save the coho. Fisheries experts say Felta Creek is a key piece to the potential recovery of the coho. The California Department of Fish and Wildlife reports that, as recently as 2012, Felta Creek was the only tributary of Dry Creek that supported coho salmon-spawn "redds" in its gravel beds during the years-long drought just ended. The winding and well-canopied creek runs year-round, even in the worst of the drought years—and with the rain-soaked winter of 2016–17 in the rear-view, fisheries experts are hopeful that it provided a huge boost to coho and steelhead stocks.

A public comment submitted by Sebastopol resident Sandy Eastoak on June 26 pithily summed up the arc and scope of the concerns about this timber-harvest plan. She cited a litany of concerns that echo through the dozens of public comments filed in opposition to the plan: logging on steep slopes that could lend to the possibly of landslides, creek sedimentation, questions over the structural integrity of bridges over the creek that logging trucks would use, fire safety along the winding Felta Creek Road, and the safety of residents and nearby schoolchildren at the West Side Elementary School located at the bottom of Felta Creek Road.

Other critics highlighted the approved use of a chemical agent called Dust-Off to suppress dust raised on Felta Creek Road, which runs adjacent to the creek, noting that the magnesium chloride–based product has been studied and shown to be toxic to humans and animals alike.

"But the overwhelming, urgent reason to block this rapacious plan," Eastoak wrote, "is that destroying salmon habitat in our already decimated area is shocking, ignorant and ecologically criminal."

Bareilles says the THP addresses or mitigates these various concerns, and says some have been overstated. He stresses that none of the logging will be done adjacent to the creek, where a deep buffer zone of forest will remain intact. He's agreed to limits on when logging trucks can use Felta Creek Road and says he's done everything asked of him by Cal Fire. He bought the land for $2.5 million in 2015 and says it's currently listed on the market for $7.5 million, should an appropriate buyer come forward—and notes that there's more than $3 million worth of timber on the land, which is zoned for logging. He says he won't refrain from logging the land once a promised lawsuit is filed, "unless someone comes along and buys the property."

In the meantime, he's already got purchase orders pending with Redwood Empire and a Mendocino lumber company. "I'm hoping they'll sign the plan this week," he says. "They said they are going to approve it."

Residents and activists are convinced that the fix is in on this THP. Indeed, Cal Fire's matrix of the numerous THPs under consideration across the region and state would seem to indicate as much.