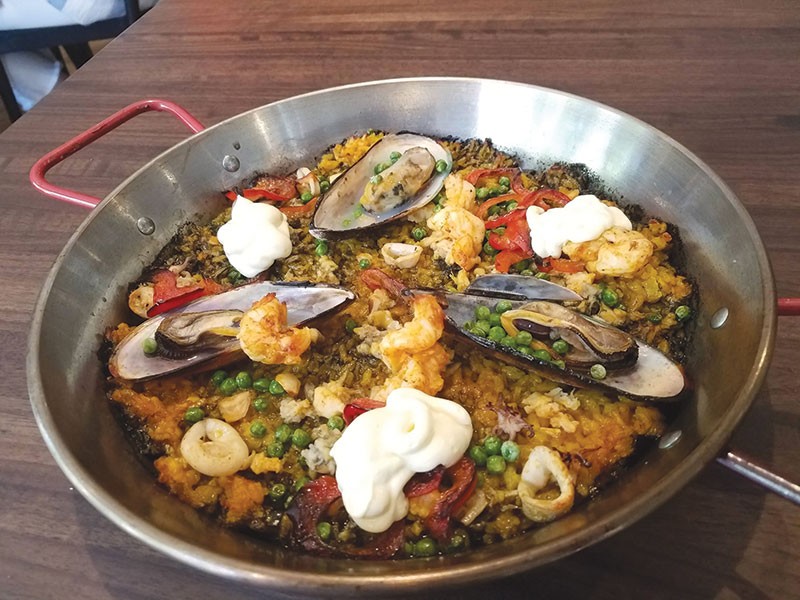 When I was a senior editor for Make magazine a few years back, the two biggest events of the year were the Maker Faires in New York and San Mateo.

If you've never been, Maker Faire is part science fair and part Burning Man festival that attracts legions of DIY tech enthusiasts, hackers and geeks. There's nothing like it.

My favorite part of the event was the day before it opened, when all the makers were busy setting up their booths and readying various contraptions, experiments and whirligigs. It's a tradition that the long day of preparation ends with a party featuring cold beer, music and a long line of hungry makers waiting for a plate of Gerard Nebesky's paella.

The Occidental resident, whose white goatee matches his curly head of hair, has long been a fixture at the two big Maker Faires, where he cooks vast quantities of paella with wooden spoons as big canoe paddles in mammoth pans as big as satellite dishes. I miss those paella parties.

Nebesky and his brigade of risotto pans are regulars at various Bay Area festivals and farmers markets, but now the patron of paella has a fixed location in downtown Santa Rosa. After what seemed like an eternity (I was hungry), he finally opened on Fourth Street last month, where Persona Pizza had its short run. I predict Gerard's Paella will be there for quite a while.

The remodeled space has an understated, modern feel. I love the low orange stools and beautiful wooden tables. There's a bar with a great lineup of local and Spanish wine and beer, and a separate patio that I'm eyeing for our holiday party.

Nebesky inherited the former occupant's wood burning oven. I'm glad he kept it. The paella dishes are assembled in front of customers as they line up to order, and are finished in the oven to delicious effect.

If anything, the paella is even better than I remember it. The rice has a wonderful, toothsome quality. I could taste each grain. I tried the El Pescador ($14), mussels, clams, shrimp and squid made with peas, sweet peppers and inky black arroz negro. The three dollops of aioli were about two too many, but otherwise it's fantastic and big enough to share. There are also vegetarian and meatier versions.

The bocadillos (baguette sandwiches, $8) may be my new go-to lunch. They're served on soft, freshly baked baguette rolls. I tried the Choripan—thinly sliced chorizo sarta, tetilla cheese and charred kale. Tetilla is a semi-soft cow's milk cheese from Galicia that's wonderfully creamy and sweet. It's great layered with hearty chorizo. The jumble of fat olives on the side is a nice bonus.

I was pleased to see a number of classic Spanish tapas. The kitchen serves a respectable patatas bravas (spicy potatoes, $8) that's just begging for a glass of Estrella Damm lager to go with it. The fried calamari is another beer- or Albariño-friendly snack. Instead of bread flour, they're battered in chickpea flour and served with smoked paprika-spiked aioli. The gambas al ajillo ($10), five plump prawns sizzled in spicy garlic butter, are worth the ensuing garlic breath—use it to tell your friends about Gerard's new home.