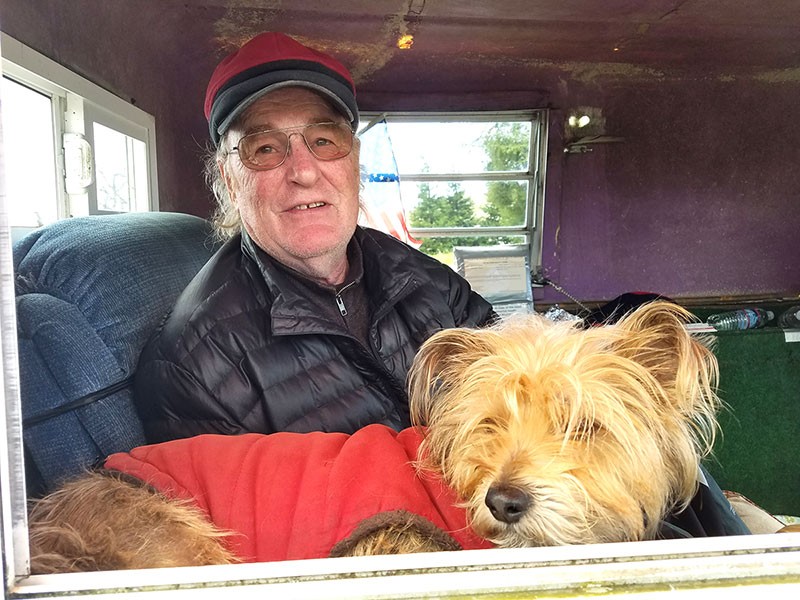 Greg Brummett's roadside smoked-salmon business is open on weekends, except when it's not.

If he's open and you decide to buy his applewood-smoked fish, that's great. If not, that's OK too. It's not a moneymaker for him. But that hasn't stopped him from running the business for the past 35 years.

Brummett, 73, is as much a fixture of the West County landscape as apple orchards and Pinot vineyards. He wants to sell you his smoked salmon, but he's just as happy to sit in his trailer and read esoteric fiction in a worn, easy chair with his shelter dog, Nudge, in his lap. Mainly he likes to talk. "I just like interaction with people," he says.

Where I Live Now by Lucia Berlin. ("She's real good," he says.) He's also working on California's Over by Louis B. Jones. ("It's been a year reading it. It's very lush.") His current favorite is Nord by Louis-Ferdinand Céline. ("He's a crazy son of a bitch. A real anarchist.") "[Henry] Miller stole all his slang from Céline," Brummett says.

Until last year, Brummett's squat, green trailer, with its signature salmon-smoking-a-pipe sign, was a weekend fixture on Highway 1 just south of the Russian River near Jenner. But Caltrans gave him the boot, so now he parks his trailer on Highway 12 west of Sebastopol. It's right across the street from his home and where he smokes his Alaskan salmon. (Local salmon is too expensive and sporadically available, he says.) He liked his former location better because it was easier for cars to get on and off the highway. He also misses the drive up Highway 1.

But Brummett is adaptable, and so is Nudge, a once anxious and yappy terrier who's now a friendly, sweet dog who climbs out the window of his trailer to meet customers as they open up the coolers that hold the smoked salmon. Nudge will soon be featured wearing a Superman cape on Brummett's new business cards. Brummett likes to put his dogs on his cards in crazy get-ups. His current cards have a photo of his former dog Photoshopped on a hang glider soaring above the mouth of the Russian River and Goat Rock. A previous set of business cards depicted another late dog on a surfboard. Because, why not?

The salmon, by the way, is dry-brined and hot-smoked—it's pleasantly salty-sweet. I think the jerky-like end pieces are best. The thicker pieces can be rather dry.

Brummett's is a cash-only business, but Brummett will often float credit to customers who come up short. "You can pay me the rest in February," he told one.

When Brummett worked as a checker at various grocery stores, he loved the express lane best.

"It was short and quick. You get the best stories because they don't stick around very long," he says.

Those are the interactions he has now with his salmon customers. He spends Monday through Friday alone, reading and smoking salmon. Come the weekend, he craves conversation.

"You gotta do something," he says.

As I prepare to leave with a package of smoked salmon, Brummett offers a rough quote from another favorite writer (after Henry Miller), Saul Bellow: "The last of the human freedoms is to choose your attitude in any set of circumstances."