HBO's 'Deadwood,' a Western for our times 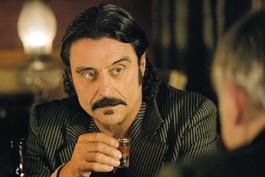 
Has there ever been a Western less interested in pictorial values than Deadwood? Season three began on June 11 on HBO; fans have been readied by the season-two DVD collection that came out two weeks ago. Deadwood doesn't dwell over the wide-screen beauty shots of the Rockies, but it begins with a taste of Marlboro Country in the titles. A wild horse runs free, passes by a thief purloining a chicken, blood coagulating over a block of ice, and a grubby, plump prostitute lowering herself into a bath. Still, the mustang can't get into town fast enough. Deadwood's makers understand the pioneer sentiment that a camp full of ruffians is better than a howling wilderness.

The show is shot on a low budget at Gene Autry's old Melody Ranch near Newhall, where 70 years of Westerns were made. What would the squeaky-clean Autry have made of the dialogue? The word "fuck" appears about 20 times per episode, maybe not extreme considering the tough conditions of 1877. There's more violent language than violent deeds in the show.

Deadwood is best known as the town where Wild Bill Hickok was murdered. The first season assured us that Sheriff Bullock would take Hickok's place as hero and avenge this Greek-tragic killing. As Bullock, Timothy Olyphant is the image of well-dressed, well-figured law. On the face of things, he's a courtly, completely standard Western hero. Among the many crimes committed in the town of Deadwood, the strangest must be the stealing of the show by the villain.

The most distinguished creation by executive producer David Milch is an outlaw, Al Swearengen, played by Ian McShane. The Gem Saloon's owner is a dyed-whiskered pimp and schemer, and a milky-eyed killer with a look of contempt that never softens, even in pity for business associates who can't understand his many gambits. Swearengen is a lion presiding over less-bright jackals, and in this and other ways, he's much like HBO's Tony Soprano.

A villain becomes an antihero when we see how hard he works. Swearengen busts his hump, as Tony Soprano puts it. Both he and Tony had abusive childhoods. Recently, both of them almost died, Tony from a bullet, Swearengen from a bladder stone. Finally, both Tony and Al have meaner, crueler rivals to make them look more human. Tony has Johnny "Sack" Sacramoni. Swearengen has rival saloon keeper Cy Tolliver (Powers Boothe). Boothe, famous for playing silver-haired, nobly browed swine, demonstrates the rotten side of looking too handsome. Moreover, he has a fine hissing voice, like a rattlesnake sent to Harvard Law School.

Throughout the second season of Deadwood, Swearengen consolidates his power, which is endangered by the new telegraph line out of town. Rival politicians seek to incorporate Deadwood into either Montana or the Dakotas. There's a stranger in town who combines the worst qualities of venture capitalist and Jack the Ripper. And the wealthy miner George Hearst is lurking about. Hearst (William Randolph's father) is an expert spoilsman, even by the exacting standards of the Gilded Age. Balancing the demands of these would-be empire builders, Swearengen must be both Al Capone and Plunkett of Tammany Hall.

In describing the creation of series and characters, David Milch, formerly of NYPD Blue, drops the names of Melville and Hawthorne; he also claims that Deadwood's nerveless doctor (Brad Dourif) is a lift from Joseph Conrad. Deadwood, though, is largely a species of improv. The New Yorker's Marc Singer describes Milch composing the dialogue on set, surrounded by hushed, seated interns: an "equal parts master class and séance." Since the interns on the show are female, Deadwood gets credited scripts from an unusually large number of women writers. TV writing is still mostly a man's profession, which may be a way of explaining why so much TV is unwatchable.

Writers love to scent themselves with brimstone. Milch claims his surgeon father operated on wise guys to keep them laid up, right at the time they were supposed to be testifying to Sen. Estes Kefauver. In addition to his struggles with booze and drug addiction, Milch says that on one occasion he illegally buried a dead man in Mexico. As he knows something about how dirty money gets refined by politics, Milch made his Western town a mirror of business corruption today.