The pleasures of putting one's tongue in an altered state 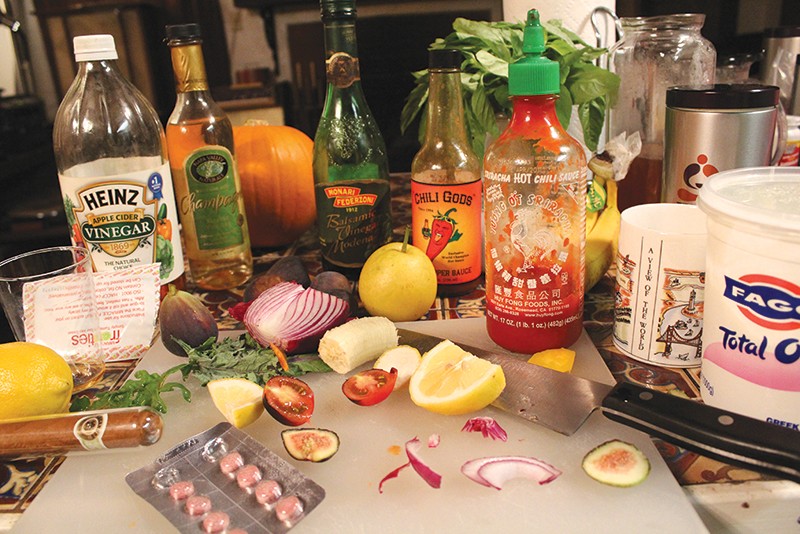 Hey, you. 'Sup? Do you party? Yeah, me too. Hey, I've got something I bet you've never tried. Wanna go into the kitchen and take a hit? Yeah, it's just this little red tablet. Let it dissolve on your tongue—don't rush it, or it won't work. Now taste this lemon and try not to freak out, OK? Weird, right? It's sweet! It's not sour at all! Here, try a lime.

The tablet I gave you is Synsepalum dulcificum, sold as miracle fruit, a completely legal, organic berry that can be grown in your house, even. It turns sour into sweet, but preserves all other flavors that go into your mouth. That means that, though it will be sweeter, the banana will still taste like banana, the strawberry like strawberry and the snozberries taste like . . . well, you get the picture. Cool, right? Keep eating stuff, try different things. It'll last for about two hours or so, but be careful not to eat too many lemons—just because you can't taste the sour acidity doesn't mean it won't burn a hole in your gut if you eat too much.

Have you ever had pineapple—on miracle fruit? Oh, man, it's, like, soooo much more intense. It's like someone put a pineapple inside a pineapple and covered it with a pineapple-reduction sauce. The sweetness is unreal, it's like a different kind of sweet, like stevia or agave or something. It's not quite like sugar, but it doesn't taste fake like Splenda, either. Oh, and Greek yogurt is like soft serve ice cream. Just right out of the container. The best kind is the nonfat, because it's a little more sour. The more sour something is, the sweeter it tastes when you've popped a miracle fruit.

Let me warn you, though: everyone has a different reaction. Some feel a stronger flavor shift, and some apparently taste bitter foods as somewhat sweet. I don't have that reaction. I tried balsamic vinegar, like someone suggested, and, damn, it was nasty. It was like taking a sip of really bad vinegar, like worse than normal. And onions? Forget it. It enhanced the spiciness and raw flavor of the onion. It was pretty much unbearable. Some people say Guinness beer is tastier on miracle fruit, but I think it still tastes like delicious Guinness beer, with little or no change.

The berry comes from West Africa, and has been eaten there by indigenous peoples for hundreds of years. It was discovered by the Western world by explorers in the 18th century. It works through the protein miraculin, which binds to taste buds and induces sweetness when it comes in contact with acids. Sounds like a James Cameron movie, right? Too fake to be real, like mining an alien world for "unobtanium." But it's real, and I can get it for you whenever you want. Just give me, like, $2 per hit. That's the friend price, you know.

Of course there are other foods that change the chemistry of flavor. Anyone who's eaten spicy food knows the relief that comes from sugar, especially dairy sugar. I once absentmindedly touched my finger to my lips after cutting habañero peppers, and spent the next hour with my face covered in yogurt and sour cream, moaning in pain and screaming at everyone, "This isn't funny! It hurts!" Dairy was the only thing that helped.

And there's salt to counteract bitterness. I used to get the weirdest looks when I'd go into the coffee shop by the office and put a dash of salt into my black coffee. But, hey, the coffee shop made bitter coffee and I didn't like cream, so this helped me get a caffeine fix without sacrificing too much taste.

But, boy, this miracle fruit. Ya know how pot is used to help cancer patients and stuff? Miracle fruit could seriously help diabetics curb their sugar craving. Instead of satisfying a sweet tooth with a cookie-inspired insulin spike, pop a miracle fruit and eat some unsweetened Greek yogurt. It's nutritious and has probiotic properties, which aids in digestion. It's all good, right? Wrong.

Even though it's legal to buy, consume and sell, its extract is classified as a food additive and would be subject to USDA review, which would take years. In fact, in 1974 Robert Harvey was all set to launch a company selling the berry's extract, primarily marketing it as a health product to diabetics. The USDA had been on his side, leading him to believe it would be labeled "generally recognized as safe." He was all set to market products like "miracle berry lollies," which tested better than regular ones with focus groups.

But a week before the launch, the USDA changed its mind and classified it as an additive, requiring more years of testing. Harvey couldn't afford it, and the company folded before it even began—some say because of behind-the-scenes finagling from the Sugar Association, a sugar-industry lobbyist (not a soul pop group from the '70s, as I first suspected).

But, hey, at least we can still get the tablets and berries for home use. I'm gonna get some people together and have a flavor-tripping party. Put a bunch of sour stuff out and give everyone a hit of miracle berry. Wanna come? It's just two bucks a hit—friend price.