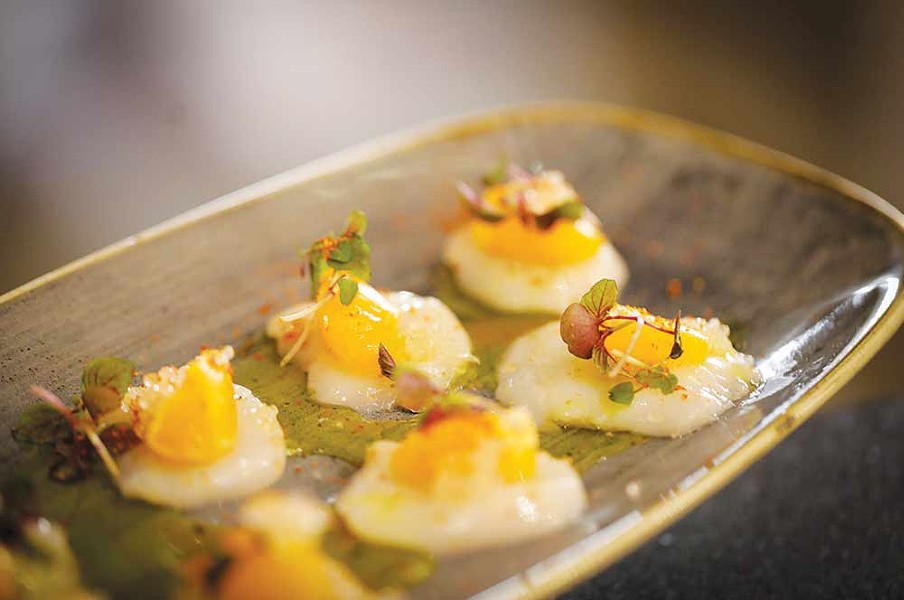 Gone are the '90s design elements architect Cass Calder Smith brought to the cavernous space that was the longtime home to Italian restaurant Frantoio. Even vestiges of the celebrated stone olive press are nowhere to be seen. Instead, Bill Higgins of Real Restaurant Group (Buckeye Roadhouse, Picco, Bar Bocce, Bungalow 44 and Playa) has reimagined the 7,200-square-foot space just off Highway 101 in Mill Valley. The revived restaurant, surprisingly named Floodwater, features five distinct eating areas and a 30-seat bar.

As the Real Restaurants empire grows, second-generation Higgins', Tyler and Henry are rolling out this new concept that appears to be doing its level best not to compete with its many existing properties. Vietnamese chicken wings and pork belly steamed buns are a clear nod to one of the group's now-closed but beloved Union Street eateries, Betelnut, and a chicken matzah ball soup offers a Jewish deli favorite.

Executive Chef Michael Siegel has created an ambitious menu that is quite literally all over the map. Jewel-like scallop crudo prepared with tart finger lime and pickled citron shares space with an equally inspired vegetarian cassoulet concocted of butter beans, farro and broccolini. But I'm not going to lie—the best thing I tasted at Floodwater is the pizza. A dedicated pizza oven in the lively dining/bar area pumps out fresh, blistered pies with toppings including potato, roasted garlic, leek veloute and mozzarella. A salsiccia version features housemade sausage, caramelized onions and sweet peppers.

While the food is eclectic, the bar menu is more straightforward with a handful of cocktail offerings, 10 mostly-local craft beers on tap and familiar California wines by the glass. Five flat-screen TVs add to the lively nature of the bar, but a quieter, more lounge-y room flanking the main bar provides a more intimate atmosphere with couches, chairs and more screens. And yet another dining option is at the opposite end of the room where booths, four-tops and tables fill out the space and offer a quieter dining experience where guests can hear one another speak.

Floodwater just opened on Nov. 29 and while it's quite likely it will draw a bar crowd, I suspect the menu may undergo some tweaking. Trying to offer something for everyone is understandable, but maybe these pros should focus on what they do best—making really good pizza! Oh, and desserts! Two standouts included a sticky toffee pudding with dates and a huckleberry panna cotta with ginger honeycomb candy.