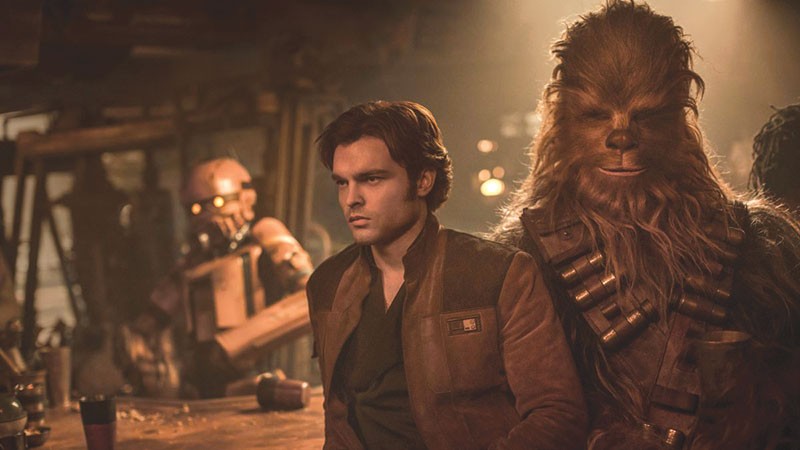 Solo: A Star Wars Story has two principle disappointments: it's neither as full of revolutionary ardor as Rogue One, nor as touching as the last two installments, where seemingly immortal childhood heroes bit the dust.

Co-scripted by Lawrence Kasdan, who co-wrote The Empire Strikes Back, this is certainly one of the most romantic of the 10 films so far. But it's also spotted with doughy patches, heavy info dumps and battle scenes that aren't quite coherent, even though opposing sides helpfully use different colored lasers so you can always tell who is shooting whom.

The young Han Solo (Alden Ehrenreich) is just one more thieving kid on a gray/blue shipbuilding planet. He and girlfriend Qi'ra (Emilia Clarke) escape from a life of crime in a hotwired flying convertible, chased by the authorities and their alligator/mastiff hybrids. Forcibly separated from Qi'ra, Han joins the military to escape and ends up in trench warfare on a mudball planet. He and his new Wookiee sidekick, Chewbacca, join a gang of deserters led by Tobias Beckett (Woody Harrelson), his wife, Val (Thandie Newton), and a quadruple-armed ape named Rio Durant (voiced by Jon Favreau).

Having one chance left, Han and his gang propose a Wages of Fear–style journey to ship back volatile superfuel. Part of the adventure involves recruiting the suave gambler Lando Calrissian (Donald Glover). But none of it is to be taken too seriously. The reliable gags include Han saying, "Wherever I go to, it can't be worse than here"—a line as guaranteed of payoff as "At least it's not raining." In a final shootout, Ehrenreich stands in a tense, wide-legged crouch, as if he'd been studying old Western movie duelists.

Howard has improved a bit since his stodgy, sentimental '80s filmmaking. His new swiftness shows in percussive reaction shots, such as one of a tense Wookiee, white-knuckling it as the Millennium Falcon cruises by a moon-size, 120-eyed space creature. Chewy's baleful growls are some of the best lines in the movie.