Following Her Own Star

Eleanor Coppola on the importance of the unseen path 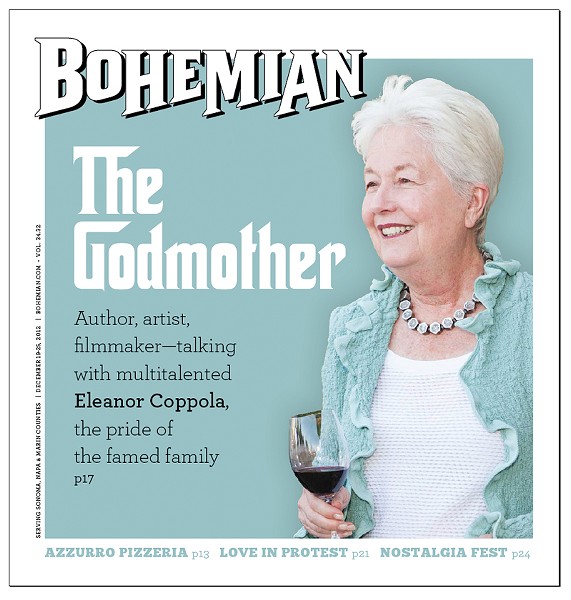 Smartly dressed and looking younger than a woman enjoying her seventies, Eleanor Coppola is a portrait of poise. When it's suggested that she's the de facto grand dame of Sonoma County's wine scene—given the epic, family-friendly winery and resort that bears her husband's name in Geyserville—she doesn't take the bait.

Eleanor Coppola is far too grounded and earnest to be susceptible to such platitudes. A few moments with her and one realizes she's not someone interested in the limelight so much as, say, the use of quicklime lighting in 19th-century theater. As an artist, she has more practical concerns. Chiefly, what's next?

"I'm going into my studio everyday, and it's really great to have a time of transition, where you can look in your books and make sketches and think about all things you might want to be doing in the future," says Coppola. "Right now, I'm making a series of watercolors. I don't know where that's leading, but part of it is going down the unseen path."

That "unseen path" has led Coppola through a dizzying array of life experiences. Despite being the wife of film phenom Francis Ford Coppola and the mother of filmmakers Roman and Sofia Coppola, Mrs. Coppola has always followed her own star.

But even before Hearts of Darkness, Coppola enjoyed a varied career in visual arts. In the early 1960s, she was creating commissioned decor for restaurants and hotels, working closely with architects and generally applying her eye to an array of creative projects, including a mural for the airport in Las Vegas. When she was offered a gig working with the art director on the set of Dementia 13, a gothic horror picture helmed by a new unknown director in Ireland, the gig appealed to her innate spirit of adventure.

Nearly a dozen documentaries to her credit later, the question looms—would she have continued to work in film had she not met Francis?

"When I got there, I started getting homesick and really missing my life at home. Francis was in this wonderful creative ferment, and it was very exciting for him, but I was just starting to fade," she explains.

The film's distributor had intended to send a crew to the Philippines to shoot a short promotional documentary about the film, but the director elected to handle the promo in-house to keep them away from an already beleaguered production.

"Everybody had a job but me. I had made these little art films in the early '70s. He said, 'It's five minutes, you can get it, Ellie,'" Coppola recounts. "It grew organically, and I really got into it. Again, it was a visual expression.

Features Eleanor Coppola Hearts of Darkness Notes on a Life