Food to the Rescue

It's not quite an army of volunteers that wait for a truck to roll up to the service entrance of the Vintage House senior center on a recent Wednesday morning. The volunteers, mostly from the charitable Kiwanis Club of Sonoma Plaza, number about a dozen. But they do prove an effective force—and it could be said they have a capable general.

As soon as the refrigerated truck's lift-gate hits the pavement, the volunteers pounce on a pallet of crates at the direction of a petite woman wearing a pink, knitted cap with pussycat ears. Sheana Davis owns the Epicurean Connection catering and culinary education center in Sonoma. During the North Bay fires in October, she found herself suddenly leading one of the area's rapidly evolving, seat-of-the-pants food-relief efforts that paired Bay Area chefs with thousands of displaced people.

Now that the urgent needs of evacuees have past, the fires have exposed the continuing needs of thousands of people who are still on the edge. And the ad-hoc relief efforts are struggling to keep the supply chain going.

Breaking up the pallets and parceling out crates of donated food, which arrived direct from the kitchens of Facebook, Davis divvies them up on the spot: "Moose is 200 meals," she confirms, rationing a portion for the charitable Moose Lodge of Sonoma. Then a marimba ringtone calls her away to the next 15-second negotiation. Every minute or two the phone chimes again.

When the fires forced Davis to evacuate her home, she and her husband landed at the Sonoma Valley Inn, in the same boat with many others there—just lucky to have their pets with them. "They were kind enough to let me bring my dog and my three very bad cats," Davis says.

Davis had just catered a cassoulet fundraising dinner for the Bouverie Preserve in Glen Ellen.

"To know we were doing a dinner the night before, and wake up to have it burnt down, is surreal," says Davis. But she had a refrigerator full of prepared food and 28 more events suddenly canceled, so she brought the gourmet fare to the hotel and began doling it out.

Meanwhile, Alexander Valley resident and food-policy advocate Melanie Wong evacuated only days before a planned trip. She decided it was best to just go ahead with her plans.

While waiting to catch her plane at SFO, she got a call from Steve Guilliams, a San Francisco engineer with family ties to the North Bay. He wanted to know if she could help with his idea for a "scaled strategy" to feed large numbers of people through commercial kitchens.

Through his Silicon Valley connections, Guilliams quickly secured a commitment for prepared food from Facebook chefs. "I talked to him Thursday," says Wong, "and the first delivery was Sunday morning." 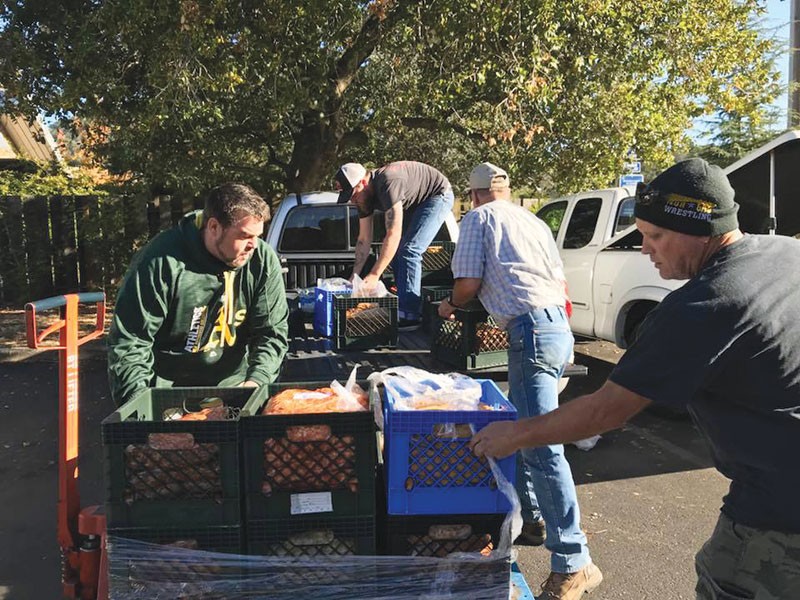 Asked if she knew who in Sonoma County might be able to provide a ground game, Wong knew just the person—Davis.

Now at Sonoma Springs Community Hall on Highway 12, Davis and her staff and volunteers repackaged and served the donations from Facebook, as well as from Jackson Family Wines and San Francisco chefs, under the banner No Pay Café/Café Gratis.

They served 7,500 meals a day at peak operation. Wong says Facebook is an ideal partner because chefs for the social media company already whip up grub for more than 30,000 employees on any given day. "It's not hard for them to do 5,000 extra meals a day," Wong says. "And it's fresh, wholesome food." It was served with no questions asked, no proof of residency required.

It also gave restaurants a break as they struggled to regroup, she says. "Our idea was, we'll take care of feeding the people and give you the chance to get back in business again and kickstart our tourism economy and get our food system going again."