For the Love of Leopold 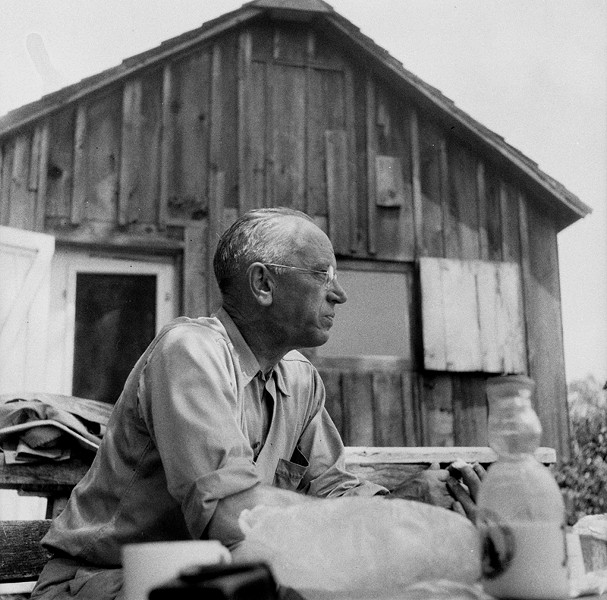 A brave yet bashful author, Aldo Leopold never cared for fame and fortune. Though his classic 1949 collection of essays, A Sand County Almanac, has sold millions, he himself remains largely unknown today. "Aldo who?" a quiz show contestant might well ask.

But for decades, family members, friends and followers have kept his flame burning brightly. Now, scientists, teachers and activists want to make the visionary environmentalist, who died in 1948 at the age of 61, as well-known as his book, and as respected a figure as Henry David Thoreau, author of Walden; John Muir, founder of the Sierra Club; and Rachel Carson, whose feisty polemic Silent Spring helped create the Environmental Protection Agency.

Unlike Thoreau and Muir, Leopold was a dedicated family man, college professor and government employee. Unlike Carson, who achieved sudden fame, he never received national acclaim in his lifetime, not even from conservationists. Still, over the past decades, his work has gained respect. His stunning essay "Thinking Like a Mountain" has inspired half a dozen or so imitations with titles such as "Thinking Like a Watershed" and "Thinking Like a River."

Pretty soon, ecologists everywhere may be "Thinking Like Leopold," if they aren't already, which means thinking ethically about the earth.

The year 2013 might be the Leopold moment for our time, and just in "the nick of time," to borrow Thoreau's phrase, now that climate change has undeniably arrived. A snazzy documentary about Leopold titled Green Fire, completed two years ago, is now reaching large audiences—in April, it airs nationwide on PBS—and the prestigious Library of America has just published a collection of Leopold's best works edited by Curt Meine. Meine headlines the three-day Geography of Hope Conference, running March 15–17 in Point Reyes Station, that's all about the author of A Sand County Almanac.

There's no more fit setting for the conference than West Marin with its rich agricultural history, brave new organic farmers and ferocious battles about trees, water and, most recently, the oyster, the lowly mollusk that made Point Reyes legendary and that continues to divide friends and families ever since the federal government ordered the closure of Drakes Bay Oyster Company. The wounds haven't healed yet. Robert Hass, a former U.S. poet laureate and a longtime resident of Marin, hopes that the conference will create a calm atmosphere to talk about the oyster wars. "Oysters and the environment are an inescapable topic," he told me the day after he returned from a trip to Myanmar. "This year's conference is more relevant to Marin than any other we've ever had."

Co-sponsored by the U.S. Forest Service, the Aldo Leopold Foundation and the Center for Humans and Nature, this year's get-together—the fourth in five years—brings together scholars, activists and poets from near and far. Geography of Hope fans and followers can hear lectures, watch the film Green Fire and meet its producers, go on outings to farms and fields, watch birds, learn about habitat restoration and taste organic goat cheese at Toluma Farms in Tomales. The documentary Rebels with a Cause will also be shown. Never before have so many outstanding ecologists and conservationists come together to talk about Leopold's identities, ideas and ethics that, Leopoldians insist, can help save the earth if farmers, hunters, ranchers and tourists work together.

The rallying cry for the 2013 conference, "Igniting the Green Fire: Finding Hope in Aldo Leopold's Land Ethic," grew organically from previous gatherings about farming and water. The very first conference, in 2009, focused on the "geography of hope," a phrase coined by Pulitzer Prize–winning novelist Wallace Stegner, who died in 1993. These days, Stegner serves as a friendly environmental ghost who haunts West Marin and its park rangers, tree huggers and citizens who want to wander wild lands before—as Joni Mitchell lamented in her pop anthem "Big Yellow Taxi"—they're "paved" over with parking lots.

In the crowded field of Aldo Leopold studies, nobody knows more about him than his official biographer, Curt Meine. A modest Midwesterner like Leopold, Meine gives credit to all the players on the Leopold team and insists that the ecologist's legacy ought to be written and rewritten by everyone in a community, whether it's Point Reyes or his own in the Driftless area of Wisconsin, a Midwestern version of Northern California. Like Leopold and Stegner, Meine expresses hope about the environment, though he doesn't lapse into glib optimism. "Every landscape is pregnant with hope and despair," he tells me the day we talk, which happens to be the anniversary of Leopold's birth. He adds, "No landscape is so bleak that it's hopeless. Even in the most despairing environments, something positive can be done."

Almost everyone who writes about Leopold has an epiphany. Meine's took place in 1982 in the University of Wisconsin library. An eager graduate student, he opened a box with Leopold's papers and held them in his hands as though they were the Dead Sea Scrolls. "That particular box contained the papers that were in his desk when he died," Meine tells me. "Some were typed, some handwritten, some the barest of fragments."

Three decades later, he looks back at the evolution of his career from fledging student to venerable scholar. He also sees, perhaps clearer than ever before, the growth of Leopold's thinking about the wilderness, that quintessential American landscape. "As a young man, the wilderness was his hunting ground," Meine says. "Later, he prized it as a historical site, because so much of the American past was enacted there.

"In the 1930s, with the Dust Bowl, he developed an ecological sense of the wild. In the 1940s, he recognized its importance as a living laboratory for scientists, and, near the end of his life, it became a spiritual place. On his deathbed, he was a staunch advocate for wild lands and at the same time a defender of farms and farming."