Esperanza Spalding evolves jazz to a wider listening base 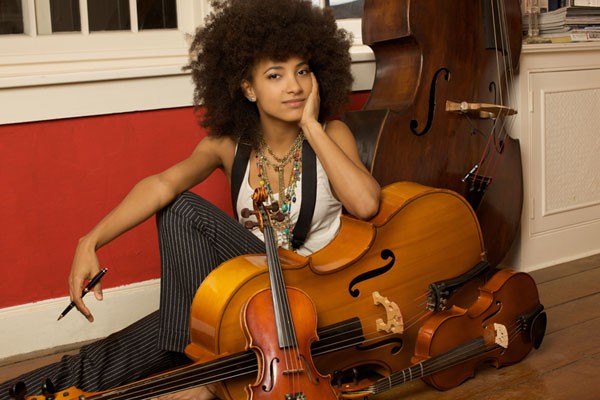 "I'm going to murder Esperanza Spalding" isn't the nicest thing to say on the internet, but in the wake of Spalding's Best New Artist Grammy win last year over Justin Bieber, it wasn't surprising. Bieber has a crazed fan base, and Spalding, assessing her death threats—there were many more—was smart enough to blow them off.

"What are you gonna do?" she tells me on the phone from Brooklyn. "That was nothing. I think that was a total farce. I remember what it's like to be a preteen or a teen, and when something happens, you get so emotional about it, it seems like the end of the world."

Indeed, Spalding, who plays the Wells Fargo Center on Aug. 24, is resilient, both in Bieber circles and against critics from the jazz world. Two years ago, the incredibly talented 25-year-old bassist, singer and composer had been a fast-rising crossover success in contemporary music when she was given a chance to demonstrate her vigorous jazz muscle playing with McCoy Tyner and Ravi Coltrane in small clubs, filling the role with immense understanding and ability.

But it was her comments about Tyner, printed in the New Yorker several months later, that jeopardized what credibility she'd attained. (I heard about the quotes from local fans who'd seen Spalding at an early, small show at Barndiva as part of the 2009 Healdsburg Jazz Festival.) Playing with the 71-year-old Tyner, she said, reaffirmed her belief that "the most important artist and the most important time is, like, right now. It's the people who are learning now and creating new things right now. Idol worship doesn't help this music in any way."

I ask Spalding if she ever heard from Tyner after the profile was published. She didn't. "I honestly doubt he's too concerned about it either way," she tells me, but I gather she'd heard from others, based on the clarification that follows.

"We talk about it as a conceptual thing, the art form, and that's good . . . . the cerebral aspect of it and thinking about what it means and where we're headed with it, and blah blah blah," she says. "But the day-to-day reality of making music is just to do it. I mean, that's the priority, to sit down every day and explore it."

She continues: "You have those folks who are total bebop heads, who really see that as the pinnacle of the music. And then people who don't want to have anything to do with that, and say, 'Well, that was the language of back then, and now we live in today. We have to keep cultivating the idiom and forget about that. That was one strand in the stream of what music is, so let's keep on evolving and not clinging to that.' And the beautiful thing is, there's really room for everything. There should be multiple philosophies in the music, because theoretically, it's a music that's open to everybody."

Throughout Spalding's newest album, Radio Music Society, this "open to everybody" theory is applied liberally. It opens with a paean to commercial radio, while tracks like "Cinnamon Tree" and "Hold on Me" could squeeze comfortably between Joni Mitchell's Hissing of Summer Lawns and Wayne Shorter's Native Dancer. According to Spalding, the album was a challenge to be sure that "we feel proud and confident that what we're sending out is a true representation of the art that we love, and maybe through an arrangement or through the sonic quality or how we record it or whatever, we can do things that might give it a better chance of ending up on mainstream radio."

It's sad to say, but it looks like at least for radio play, Justin Bieber wins in the end.