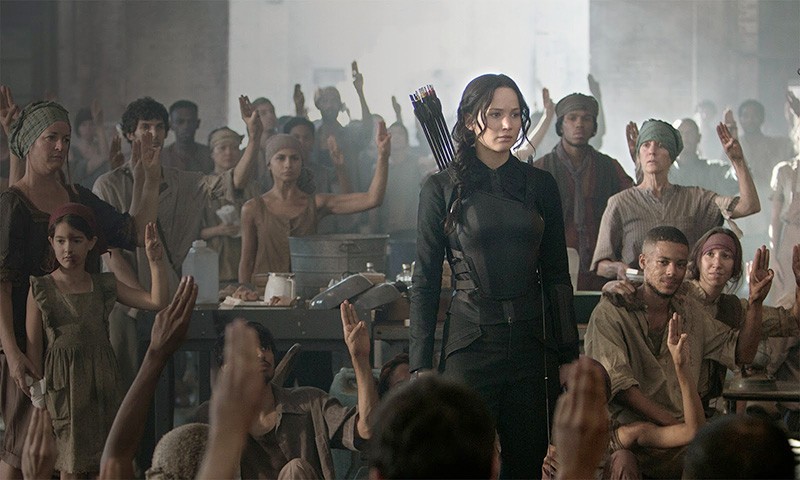 There is more natural light in a dozen submarine movies I could name than in director Francis Lawrence's Hunger Games: Mockingjay, Part I. Just where you wanted to spend the holiday season: in a concrete bunker.

Katniss (Jennifer Lawrence) is now part of an underground guerrilla army, with her refugee mother and daughter sharing her concrete cell. Also interred is Katniss' Heathcliffean pal Gale (Liam Hemsworth), kept strictly in the friend zone, with a kiss or two to keeps his hopes up.

The rebels want to use Katniss in a "proppo" (propaganda) video. Their leader, President Coin (Julianne Moore, with a silver Emmylou Harris haircut), takes meetings with her advisers, the (late) schemer Phillip Seymour Hoffman and cyberhacking expert Jeffrey Wright.

Mockingjay is not for people who feel Katniss Everdeen is at her best running around shooting arrows. It's about the war for her mind—a little difficult to make into cinema, since Katniss, like many action heroes, displays her character by what she does.

The future may have technical sophistication, but the film presumes that politics and propaganda haven't increased in subtlety since the 20th century. Worse, the dastardly President Snow (Donald Sutherland) and grim Coin are equally blind to an essential part of governing: the importance of withholding information.

The keenest dominant-paradigm hatred is displayed, as always, by Stanley Tucci as the TV host manipulating the poor dumb blonde hostage Peeta (Josh Hutcherson). Tucci has his revenge. Lawrence, shot in iPhone-ready closeups, seems distracted. She should be, since Katniss watches this movie about herself on television in the bunker.

This is the last of Philip Seymour Hoffman, and he evinces boredom, mostly. He has a fine last scene. When Moore addresses her troops, he smirks coolly, silently mouthing the speech he wrote for her, as she delivers it word for word.

'The Hunger Games: Mockingjay, Part I' is playing in wide release.