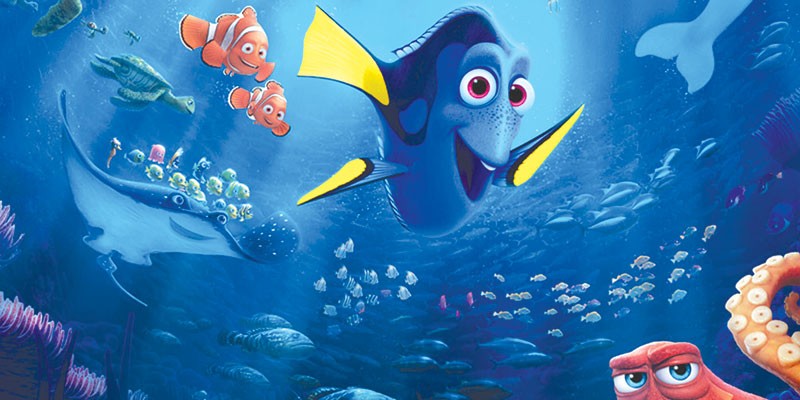 Finding Dory is a better film than its predecessor, Finding Nemo. It's an aquatic Memento. The memory-challenged blue tang Dory (Ellen DeGeneres does the addled fish's voice) retrieves forgotten images of her childhood. She seeks her long-lost parents off the coast of Morro Bay with an ever-worried Nemo and Marlin (voiced by Albert Brooks) in pursuit. Brooks' job is to give the movie some salt, and maybe his best line comes with his frustration at the dithering Dory in a tank full of identical fish, seeking her mom and dad: "She should just pick two!"

What makes Pixar great is the way it casts shadows behind its polychrome colors, contrasting a child's conflicted urges for safety and adventure. The reefs are a riot of tropically colored corals and anemones, but the ocean now is dirtier, lined with more scrap and wreckage, and Dory gets netted in the plastic rings of a six-pack holder.

Along with Dory's deficient memory and her difficulties as a young fish, one sees the plight of a generation, bracketed between children with learning disorders and their elders whose memory is slipping away. The poignancy should be even greater, but appealing as she is, DeGeneres is more like a trusted brand than an actress.

New characters speed the tale up to a terrific action-movie climax on Highway 1, with the aid of too-cute otters and a deranged coot who carries the cast in a lofty bucket of water. Studies of the intelligence and ingenuity of octopi are borne out in Finding Dory's most dynamic character, an octopus named Hank (Ed O'Neill) who just wants to retreat from the ocean—"I have bad memories of that place"—to a nice safe aquarium in Cleveland. A master of disguise and escape, Hank may make octopus sushi too sad to eat, in the same way that Bambi made venison tragic.