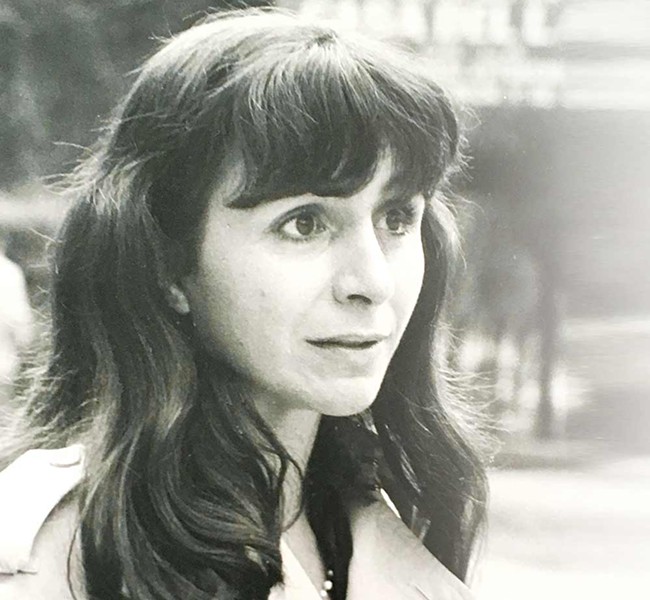 The silver lining of sheltering in place is that we can still read books. With all scheduled book events cancelled, many authors debuting books right now have lost the opportunity to publicize their work in person. The new translation of Plagios/Plagiarisms by Mexican poet Ulalume González de León is a case in point.

Local trio Terry Ehret, Nancy Morales and John Johnson have just released their collaborative translation of González de León’s poetry. So read this article and then read the book. You can even brush up on your Spanish at the same time—as the poems are in both languages.

González de León, or UGL as she calls herself, was born in Uruguay to bohemian poet parents in 1928. She studied at the Sorbonne in Paris and the University of Mexico and became a Mexican citizen in 1948. She was part of a movement of women writers in the ’60s and ’70s who experimented with personal identity and language itself in their work.

When she later wanted to read more work by the poet, Ehret discovered the misleading gender identity, which she found was tolerated and even perpetuated by the poet herself. Ehret began translating some of González de León’s poems in 2012.

González de León was a contemporary of Carlos Fuentes, Ramón Xirau and Octavio Paz—her friend and literary colleague who, in 1978, wrote the introduction to the original, Spanish-language version of her book. Her work, while popular in Mexico, had not previously been translated into English, limiting her global audience. The fact that she was a woman likely played a part. “I suspect this was a consequence of her gender,” Ehret says. “In much the same way that Chilean-poet Gabriela Mistral was always eclipsed by her contemporary Pablo Neruda, despite her being the first Latin American writer—and only Latin American woman—to be awarded the Nobel Prize in Literature.”

Co-collaborator John Johnson learned about González de León as a student in Ehret’s writing class in 2003. Years later, he introduced Nancy Morales to the Mexican poet’s work while taking her Spanish class, which included Spanish literature in its curriculum.

“In poetry, depending on the poem,” Morales says, “I enjoy how quickly one can engage with the richness and complexity of the language, the artist, the culture and simultaneously their own thoughts, reflections and values.”

Johnson asked Morales to review some of his translations of the poems, which evolved into a collaboration.

“It became clear immediately that she wasn’t simply reviewing my translations—Nancy and I were translating the poems together,” Johnson says.

He told her about Ehret and when they contacted her, the trio of translators was born.

“This creative outlet was a lifesaver,” Morales says. “It was an escape from my personal reality to a place that was imaginative, creative, interesting, unique, beautiful, mysterious, safe and bigger than me and my personal situation. I was, and I am, very grateful.”

While Johnson had no previous translation experience, Morales had written translations for medical and educational purposes. Ehret had extensive experience with personal translation projects. The team met on weekends at the Sunflower Cafe in Sonoma. Ehret and Johnson brought independently translated poems and Nancy translated on the spot. Then the three compared versions and combined them in the way they thought best.

“Once we had a sense of the original poem, we tried to make it sound like a poem in English, an endeavor that could go on for hours, days,” explains Johnson.

“I remember being struck with how translation involved ‘bargaining’ to arrive at one of many possible versions/interpretations in English,” Ehret recalls. “I realized that neither the connotations nor denotations of words could ever be carried over to my own language. I had to settle for an approximation, with so much left unsaid in the margins. We really need the give and take, the perceptions and expertise, of each member of the team to compose a translation we’re all comfortable with. Collaboration like this is slow-going.”

Indeed, it is rare for a group to embark on this kind of difficult endeavor, and the trio were not without their challenges.

The translators found certain cultural references mysterious and had to track down their meaning. Sometimes these references held and other times the references themselves needed translation. For example, the phrase “los Trescientos,” or “three hundred and a few more,” refers to a specific group of wealthy families who lived in Mexico City in the mid-20th century while attempting to hold onto their prestige and privilege.

“Because 21st-century readers of English are not likely to be familiar with ‘Los Trescientos,’ we took the liberty of calling them ‘the One Percent,’” Johnson says.

This illuminates one of the main compromises with translations—the trade-offs that must be made, in this case, to either communicate the message and ideal of the work or to preserve a potentially confusing cultural reference. In this translation, the reference to a specific historic group in Mexico is lost, but the meaning behind the reference is made clearer to the modern, English-speaking audience.

“Many times in our collaboration, the words that were chosen fell flat for me,” Morales says. “I felt the words didn’t give me the picture that the original Spanish painted for me. Often, this was a hard one to negotiate—how to create an equally beautiful poem in English.”

Ehret explains how difficult it was to either “Keep UGL’s idiosyncratic wording, grammar and syntax—part of her style—or to render the poem more accessible, more ‘readable’ in English.” “Many of my friends have told me how much they love the lyricism of looser translations, such as Robert Bly’s, Coleman Barks’ and Stephen Mitchell’s,” she says. “Many of our readers will be encountering UGL for the first time in this book. We want to invite them into this poet’s work without blunting her edginess or simplifying her style.”

After six years of creative collaboration, the book delivers—in both its literal and energetic interpretations—and brings a new literary figure to the English-speaking world.

‘Plagios/Plagiarisms’ by Ulalume González de León can be purchased online at Copperfield’s Books Online, Amazon or at Sixteen Rivers Press. For more information, go to: sixteenrivers.org