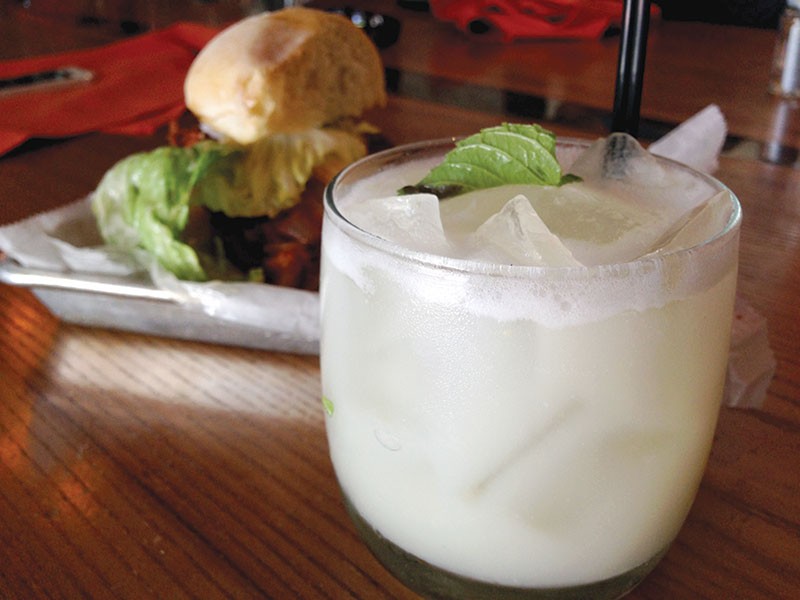 Call it World Cup fever, but lately I've had a hankering for international cuisine. Not Italian, not Chinese, not Japanese, not Indian—not because those teams are no longer in contention, but those styles are common enough that they no longer satisfy my curiosity.

At Sausalito's Fast Food Français, or F3, familiar American favorites are presented with a French take, making them intriguing and delicious without the risk of finding yourself totally hating a new type of food.

As a soccer (yes, I call it soccer) bandwagoner, I'm already in unfamiliar territory when a restaurant or bar has every TV tuned to the World Cup. I want to get into the spirit of it, but at my own pace. That makes the poppers ($11) a logical choice. Fried finger food that explodes with cheese upon first bite—what could be more American? Except that these are fried squash blossoms with rhubarb chèvre, served atop peach balsamic gastrique and red pepper jelly. The sweetness of the red pepper and subtlety of the rhubarb make for a good balance to the slight bitterness of squash blossom and goat cheese. Happily, they did explode upon first bite.

The fried flavor bombs pair well with Leffe, a light, sweet Belgian beer on tap at the bar. It's the closest thing to good beer France can claim (sorry, but Kronnenberg just isn't a standout, and fruit beer isn't always appropriate), and it's good to see it poured fresh here. The bartenders shine too. The mundial cocktail, made especially for the World Cup, could be called "A Frenchman in Brazil." It's a marriage of rich coconut and brown sugar combined with the fresh flavor of cucumber, all wrapped up in a cachaca bath. Tropical, yet unmistakably French.

The whole vibe of the restaurant is unmistakably French, really. Servers bid diners "Au revoir" upon their exit, the bartender is French, and the décor is a mix of weird art (bright-orange plastic-cast chef knifes in sequence) and West Coast chic (salvaged wood and boutique light bulbs clustered in handmade cages).

Fried appetizer needs a fried entrée, right? The poulet frit ($12) is the classic American chicken sandwich, with another French twist. A boneless fried chicken breast, bordering on extra crispy and plenty juicy, is drizzled with a habañero verjus. The result is a tangy-not-spicy zip that cuts through the richness of the aioli and fried chicken. What makes it memorable is the Vidalia onion compote, which adds a balancing sweetness and a kick of anise flavor. And, oh yeah, there's a fat slice of brie in the mix.

The pork and beans ($12–$28) is another winner. The name is a stretch, but these spare ribs are slow-roasted for four hours in duck fat and all but fall off the bone. Big, white emergo beans supplement the dish, and the result is more backyard barbecue than on-the-trail camping food.

Dessert is dangerous after a rich meal like this, and the peanut butter cup ($6) sounds safe enough. It's really a peanut butter pot de crème with an overwhelming peanut flavor and not enough chocolate. But the housemade peanut brittle on top is so addictive it should come with a warning label. It's basically roasted, sugared, salty peanuts. I mentioned to the server how delicious it was, and when the check arrived, so did more brittle. Joie de vivre!