The continental solution for stale bread 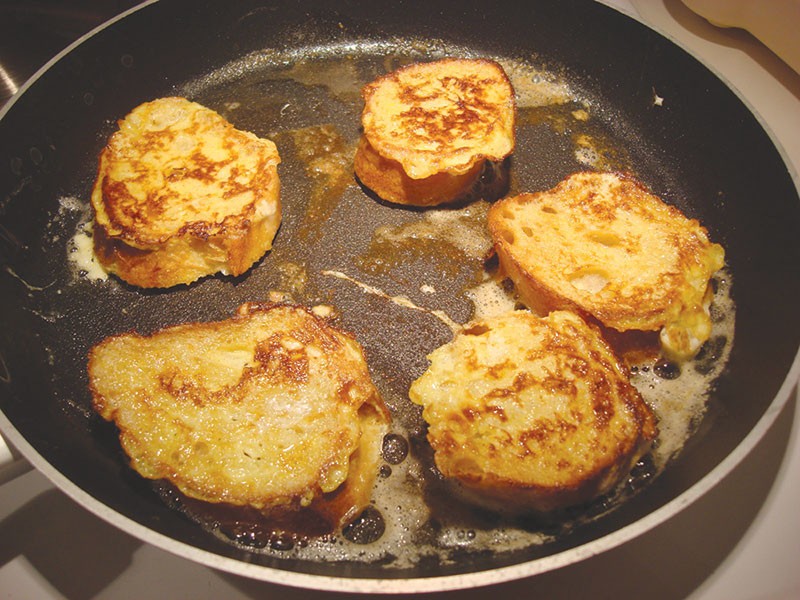 Thanksgiving is in the rearview mirror, and there's more holiday fare ahead—so what to do with all of the hard, crusty bread that will now accumulate, since there is no longer a big cavity in some dead turkey to pack it into? Fortunately, the French have the answer, in the form of a very old dish called pain perdu.

References to this dish appear in Apicius, an ancient Roman cookbook that is one of the world's oldest. However, you may have heard of it under the name "French toast," a term that isn't used in France any more than "American football" is used here. The French name, which means "lost bread," hints at the utility of the dish as a way to recover bread that would otherwise be too far gone to eat.

As the French and Romans were well aware, the most bulletproof chunks of expired bread, providing they aren't moldy or rotten, can be brought back to life with a soak in a mixture of eggs and milk. When the soaked bread pieces are pan-fried, the age and previous condition of the bread are quickly forgotten.

As a morning meal, French toast is often dismissed as little more than a system to deliver maple syrup and berries into your mouth. But savory versions can be made as well, as can sweet and savory combinations. There is no reason why, for example, sweet French toast can't be cooked in bacon grease and served with bacon and maple syrup. But I prefer a fully savory path, greased with bacon and finished with cheese and hot sauce or pickled peppers.

What makes these French toast variations a little more fun, in a naughty way, is that any permutation of French toast and bacon would get it banned from a diet plan. Sugar, fat, processed carbohydrates and the ultimate processed meat, bacon, are all bogeyman foods these days. French toast with bacon is not Paleo, low-carb, Atkins, South Beach, vegetarian or vegan, and it definitely isn't kosher.

Given my kids' reluctance to eat anything green, I discovered that I could slip significant amounts of parsley, seaweed, broccoli and even kale into the French toast pan, and it would disappear along with the egged bread and bacon.

These additions take French toast out of the realm of breakfast fare and make it appropriate for any meal. For non-breakfast eaters like myself, who nonetheless appreciate the traditional breakfast arts, savory French toast is a true game changer.

But by evening, with the hunting done for the day and the fire stoked, stale bread became a delivery system for protein and veggie-rich awesomeness that our bodies recognized would help us recover from a rough day. With the wind howling outside the cabin, pain perdu is extreme comfort food, and it goes well with either coffee or wine.

For four slices from a loaf of bread, or the equivalent in baguette medallions, use two eggs and a quarter cup of milk, beaten together.

Very hard bread needs to be soaked at least an hour, preferably overnight, in the egg mixture, while fresh bread requires only a few minutes. There is nothing wrong with keeping some crusty bread soaking in egg in the fridge, ready at a moment's notice.

Prepare the pan for cooking—which is to say, cook bacon in the pan. When the bacon is about half-done, add any vegetables that take a while to cook, like kale or broccoli. When they are near done, push the bacon and green things to the side of the pan, add oil or butter (if the bacon isn't very fatty) and add the egg-soaked bread, along with some chopped garlic. Cook slowly on low heat.

After achieving a brown on all sides, add faster-cooking greens like parsley or nori. When it's nearly cooked, add some cheese, if desired. Little chunks of brie are a decadent way to stay on the French theme. But since this dish breaks ranks with virtually every other diet and theme, why keep it French? Slices of cheddar work beautifully, as do shredded Italian hard cheeses.

And since nothing is sacred anymore, I should mention that savory French toast can also be prepared without bacon. Season with salt and pepper. Serve with something spicy, and a dollop of mayo, perhaps, with your choice of coffee or wine.