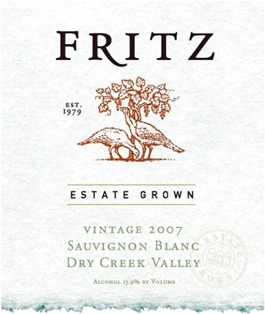 Whenever I've glanced at Fritz's wine label over the past few years, I always think of dinosaurs. Upon closer inspection, the label does not depict cretaceous-era creatures, hanging out under some ancient tree, but perhaps this error is a fanciful masking of what it really depicts, something more terrifying to a grape grower than terrible lizards: a flock of wild turkeys, decimating a poor old Zinfandel vine. When I asked our guy at Fritz about the label, he said, well, we have a lot of wild turkeys up here, and you know . . . Could be a kind of totem?

The last time I visited Fritz Underground Winery, it was just Fritz. The winery was still underground, to be sure, as evidenced by the historical photos of the building process (which can be hair-dated to approximately the late 1970s-early '80s era) behind the tasting room bar. But it was just as warm, from the cozy wood stove in the corner on a winter's day as it was on this hot, end-of-summer afternoon. The tasting room is a little less than underground.

But that made the first offering a welcome refreshment to take out to a patio table, overlooking the quiet hill country north of Dry Creek Valley. The 2008 Russian River Valley Sauvignon Blanc ($18) is one of the leanest SBs this side of Sancerre, with racy acidity and grapefruit-lime flavors and notes of white fruit, underripe pear. Quite to the contrary, the very ripe 2006 Estate Zinfandel's ($25) brambly flavors were accented with ethyl acetate and hot, woody tannin; but on account of the oppressive heat of the day, I wouldn't write it off for a winter's tasting. The 2006 Dry Creek Cabernet Sauvignon ($35) was simply a nice, light-bodied and balanced claret. The Fritz family has also taken on responsibilities for Lost Canyon Winery, formerly of Oakland. None of Lost Canyon's well-liked, plush Syrahs were on hand, but the 2006 RRV Pinot Noir, Widdoes Vineyard ($42) was notable for its high note of spicy, cinnamic acid.

The 2007 Late Harvest Zinfandel ($25) was predictably delicious, as per the style. Sweet, dark fruit with an emphasis on pure grape flavor, this is the after-dinner nectar that nature affords us at the end of the harvest, made from those grapes that escaped the gizzards of the turkey hordes.