From the Ground Up

How Dan Smith succeeded at failure, made a bushel of money, and is putting it back into the earth as fast as he can 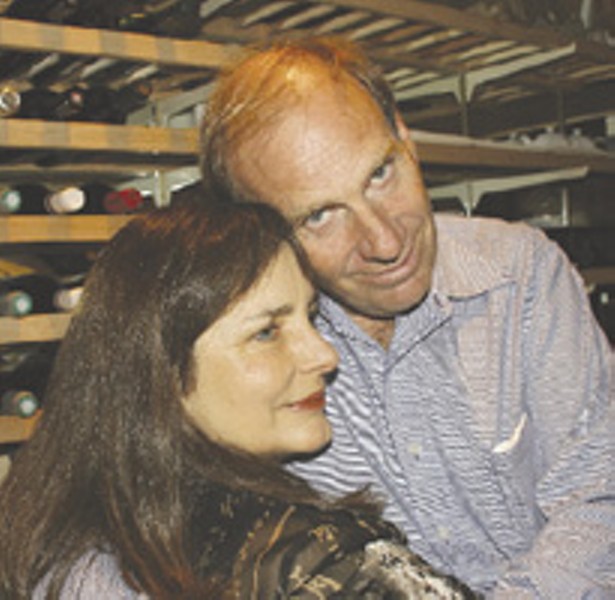 This story about failure and success begins on a 30-acre ranch. Here, on the outskirts of Sebastopol, Dan Smith--local kid turned wizard and farmer--grows all organic strawberries, raspberries, escarole, frisée, corn, peppers, leeks, cherry tomatoes, zucchini and much more. Over the last year, he's poured tons of compost--a mix of rice hulls and duck manure--into the soil to make it more productive. He's invented a precision seeder that makes the sowing of vegetable seeds nearly effortless. He's built a huge barn, restored a couple of 1946 tractors--built the same year he was born--and put up a Japanese tea house near the top of the ridge.

This sunny morning in October, he's running late, and as usual is doing more than one thing at the same time: brushing his teeth while fastening the belt that holds up his faded jeans. Summer squash has to be harvested, winter cabbage planted, weeds weeded. Smith wants to figure out how to grow frisée without brown spots, and the best way to serve the Bosc pears and the Mission figs from his farm at the French Garden, his new restaurant in Sebastopol, one that he intends to make into a destination for foodies from around the world.

Smith thrives on adversity, and over the past 30 years, he's provided himself with an array of problems to work out in his head and with his hands. He's failed, perhaps as often as he's succeeded, and his failures, he says, have led to his success. A college dropout from Sonoma State University and a conscientious objector during the Vietnam War, he's been a building contractor, a computer programmer, a financial whiz, a founder of the Sonoma County Beekeepers' Association and the president of the Laguna de Santa Rosa Foundation.

"The creative element gets me up every morning," he says. "Learning excites me." He pauses a moment, gazes at the sunflowers in the field and adds, "I think of myself as a painter. I paint in vegetables, software, bee hives and buildings."

Smith, who has lived almost all his life in Sonoma County, was born to 20th-century pioneers. His mother, Jean Farmer, worked as a potter and an artist. His father, Ralph Smith, painted movie sets in Hollywood, including the Yellow Brick Road for The Wizard of Oz. Then, during the Red Scare and the congressional committees that investigated subversives in the movie industry, his father lost his job, and moved with his wife to Petaluma, where he became a housepainter.

Dan Smith grew up poor in the 1950s. For three years, while his parents built a home, the family lived in a canvas tent with a wood stove for heat and cooking. Dan, his two brothers and his sister did almost all of the gardening, with shovels. They planted and harvested, took care of the goats and sheep, and almost all of the food they put on the table came from the garden and the farm.

"I never saw or even heard of a TV dinner," he says. "We ate our own goat meat and drank goat's milk. Mornings, I milked the goats before I went to school. In the fall, my brothers, my sister and I picked pears and apples. My mother gave us big cans and sent us out to pick blackberries. 'Don't come home until they're filled,' she'd say."

When he wasn't doing chores at home, he worked for the neighboring Petaluma chicken ranchers, many of them socialists like his parents.

Dan graduated from Petaluma High School in 1963, the time depicted in the movie American Graffiti. He attended college briefly, studied math, physics and biology, then moved to Mendocino County, where he lived on a commune, worked in a lumber mill and operated a fork lift.

"I had no plan whatsoever," he says. "Jesus, man, it was the 1960s! I wanted to stay out of Vietnam, and I did almost anything and everything that came along. When I received my induction into the military, I appealed to the draft board in Santa Rosa. 'I won't take orders to kill someone else,' I told them. They gave me conscientious objector status, and I worked at Pacific State Hospital for the mentally ill to fulfill my service."

When he returned to Sonoma County, he started a construction company and built houses, and commercial structures at Matanzas Creek Winery on Bennett Valley Road, and La Gare French restaurant in Santa Rosa. Then, on a rainy winter morning, he fell off the roof of a building and landed in the mud.

"I couldn't move," he says. "I thought I was paralyzed. The woman who owned the house we were remodeling came out and stared. 'Can I do something?' she asked. I told her to call an ambulance and bring me a blanket."

During the year it took him to recover, he created the Master Builder, a software program for builders that includes accounting, bookkeeping, payroll and estimates for jobs. Though he didn't know anything about computers when he started, he learned quickly, and, like almost everything else in his life, he learned by failing and failing again, until he succeeded. In 2001, he sold the company, which had grown to over a hundred employees, to Intuit for a bushel of money, though the deal, which was set for Sept. 13, had to be postponed in the wake of 9-11.

"I've learned there are no straight paths in life," Smith says. "Opportunities come along. We seize them or we don't. The gifts we're born with are not ours to keep for ourselves."

In 2001, his life took another radical turn, while waiting for a flight at San Francisco Airport. By coincidence, Smith met an 84-year-old cancer survivor named Woody Strong who wore a baseball cap that said, "Be a Doer, Not a Talker."

"I was 55," Smith remembers. "I listened to Strong describe the schools, hospitals and water systems he helped to build in Nepal, and I could see I was a slacker. I said to myself, 'This is who I want to be,' and I thought, 'It is possible to do the impossible.'" Within weeks, Smith came up with the funds to build a monastery for the Tibetan Buddhist monks living in exile in Kalimpong, India. It's going up right now.

Closer to home, on a Yellow Brick Road he's paving himself, Smith hopes to create a local model for sustainable agriculture that might be applicable around the country, and around the world. Along with his wife, Joan Marler, a sixth-generation Californian, and a pioneer in the field of archaeomythology, he's determined to buck big agribusiness, cultivate crops, bring back lost varieties and transform the ways we eat.

"I know we're not the first to try," he says. "But we have an ideal spot. We can grow food that tastes incredibly good and that's healthy. We're learning every day. Sometimes, we try to grow something--like Napa cabbage--that doesn't work. It's as though the land says, 'Look, stupid, you can't grow Napa cabbage in the summer. You have to plant it early in fall and cultivate all winter.'"

Later, the same day, at the French Garden, his elegant Sebastopol restaurant, Smith wears his best shirt and pants. In the kitchen, chef Stephane Roy prepares a soup from cauliflower and apples grown on the farm. The menu features a beet salad with homegrown ingredients and there's a gazpacho made from tomatoes, cucumbers, purple onions and chives picked just that morning.

"Nothing on the menu has pesticide," Smith says. "Nothing has been trucked from far away or stored in a warehouse for weeks. This is as fresh as it gets, anywhere. We're going to keep on making connections from the ground up. We're going to bring people together, and to link all of us to the land, and to the food we eat."

The French Garden Restaurant and Brasserie is located in the former Marty's Top of the Hill historic structure, 8050 Bodega Ave., Sebastopol. Open for dinner Wednesday-Sunday. 707.824.2030.