The past is the present in new play at 6th Street 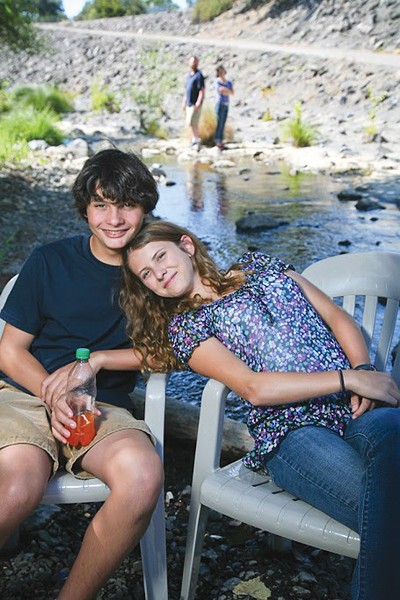 Last fall, during theater-management major Natalie Herman's first semester at DePaul University in Chicago, she called up her longtime friend Dezi Gallegos, who was in his first semester of film studies at USC.

"Natalie said, 'Hey, do you have any ideas for new plays?" says Gallegos. "'I want to produce something you've written when we're both home again in Sonoma County this summer.' I said I did have a few ideas floating around, one of which would take place in the past, the present and the future—all at the same time."

Gallegos, 19, is one of the youngest playwright-performers to have performed at the Marsh, an influential performance space in San Francisco, where he presented his solo piece God Fights the Plague. Gallegos has never shied away from complex or ambitious projects. Last summer, he co-created the play Hamlet's Orphans with a crew of kids under 18, and turned it into one of the most talked-about shows of the year.

"We decided right then," says Herman, "that if we did this, we wanted to do it right, working with the best artists, the best actors and the best director. We wanted Sheri Lee Miller to direct, because she's so amazingly good and we'd be so lucky to have her—and also because she was our first acting teacher, years ago at Cinnabar Theater."

Less than 10 days before the opening of their play, Yesterday Again, Gallegos and Herman, admit they can barely believe it's happening. Their crazy play about two college kids whose stories play out simultaneously against scenes of their past and future selves is directed by Miller (Arcadia, Of Mice and Men) with a strong cast of North Bay actors.

"The play is about how things happen in circles," says Gallegos, "so it's unbelievable that it's being directed by Sheri, who I met when I was eight years old, auditioning for The Tailor of Gloucester."

Gallegos admits the ambitious project would not be happening without the support of Herman, whom he befriended during that same production of Tailor of Gloucester where he met Miller.

"It's a play about life coming around full circle," Herman says, "and our lives have come full circle to make it happen."

"That," they simultaneously say, immediately cracking themselves up, "is pretty cool!"