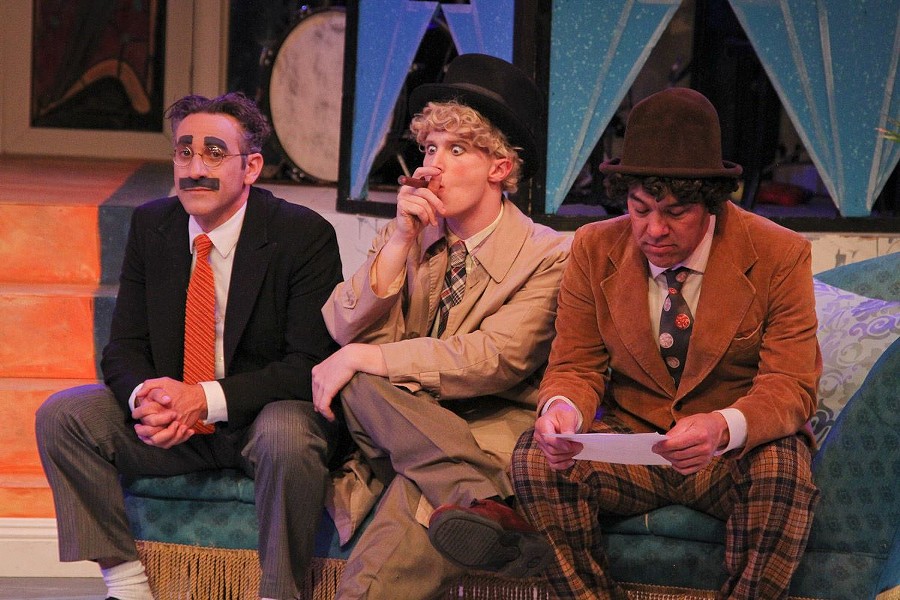 And hooray for the weird, wonderful, creatively imitative assemblage of actors who are currently bringing the Marx Brothers ‘Animal Crackers’ to retro-ridiculous life at the 6th Street Playhouse. Originally a long-running play on Broadway, ‘Animal Crackers’ is best known for the 1930 movie version, considered by many to be the finest example of the pun-filled, language-assaulting, physically offbeat comedy that the Brothers Marx made a career of. The play, with songs by George S. Kaufman, also gave the Brothers Marx a tune they would become inextricably associated with—the aforementioned, Hooray for Captain Spaulding, a goofy prog-pop extravaganza containing one of Groucho’s indelible signature lines, ‘Hello, I must be going.’

The 6th Street production uses the Broadway script, so if you know the movie well, prepare for a bunch of bits and songs that were cut from the show when it was adapted for the screen. As Captain Spaulding (the African explorer), played famously by Groucho, Jeff Coté gives an uncanny impersonation, from the painted mustache and active eyebrows to Groucho’s joyously twisty-turny dance moves. As the larcenous musician Emanuel Rivelli, aka Chico Marx, David Yen is delightfully spot-on, blending mischievous enthusiasm with a confidently trouble-making underpinning of potential danger.

Watching Yen and Coté toss famously outrageous one-liners back and forth is one of the show’s chief pleasures.

Well, that’s in the show.

Expect a slightly sinister Harpo Marx, who, in the inventive, elastic-faced hands of actor Erik Weiss, is less an imitation of Harpo than a free interpretation of the goofily creepy Professor character he played in ‘Animal Crackers.’ Don’t expect Weiss to play the harp, though. In a conspicuously desperate homage to Harpo’s musicianship, director Craig Miller — who otherwise brings a parade of inventive ideas and cleverly inspired bits to the show – accidentally throws the brakes on the show as we in the audience watch Weiss, as Harpo, hanging out watching a movie of the real Harpo playing a tune.

That probably should have been cut, though it serves a purpose, as the cast needs that time to don their outrageous and elaborate French revolution outfits and wigs to recreate the movie’s bizarre French flight of fantasy.

Though neither of those scenes work so well on stage, Miller reaches outside the film structure to introduce a brilliantly re-worked second act bit in which an excellent John Rathjen – absolutely superb in two supporting roles – steps out in his underwear to sing ‘Keep Your Undershirt On’ while putting on the costume of the marvelously droll butler Hives, nicely dueting with a similarly negligeed Jacinta Gorringe, as the marriage-minded matron Mrs. Rittenhouse.

Also excellent, in duel supporting roles, is Abbey Lee, quick-swapping outfits and wigs as Mrs. Rittenhouse’s hot-to-trot daughter Arrabella and as the scheming neighbor Mrs. Whitehead. Lee, along with the aforementioned Rathjen, commands some of the show’s best musical moments, supported by a fine onstage orchestra under the direction of Justin Pyne, and some nice choreography by Joey Favalora. Unfortunately, many of the other voices in the cast often fail to soar or blend.

Coté and Yen, who sing just fine, thank you very much, sound so much like Groucho and Chico, that – like the rest of this overlong but frequently hilarious, affectionately nostalgic show — are so stitch-in-the-side funny, little else really matters.