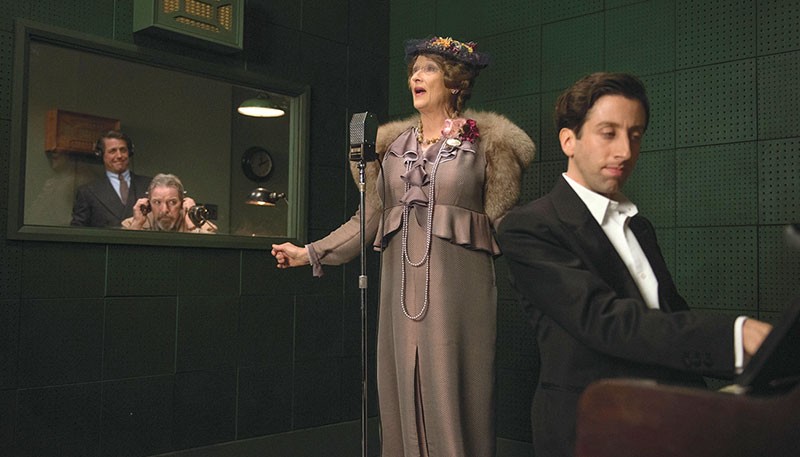 Something that's really perfectly awkward is, in essence, perfect. Florence Foster Jenkins is Stephen Frears' biopic of a show-business legend who deserves her place next to the Shaggs and Ed Wood.

We open at the Verdi Club in Manhattan in 1944, where the well-off Ms. Jenkins (Meryl Streep) is entertaining the culture vultures in Manhattan. Her husband, St. Clair Bayfield (Hugh Grant), a former actor, massacres a little Hamlet as an entr'acte before his wife and patroness, Florence Foster Jenkins, assumes the stage. The hefty lady is the center of a playlet about the winged Angel of Inspiration visiting Stephen Foster to bestow "Oh, Susanna!" upon him.

Jenkins is a patron of the conductor Toscanini (John Kavanagh), who'd rather look the other way when Florence tries to get practice as a mezzo-soprano. She hires an accompanist, Cosmé McMoon (The Big Bang Theory's Simon Helberg, the movie's real standout). McMoon little realizes he will be playing for a singer so cataclysmically off-key.

Jenkins' career soars, greased with the help of her own money. She trades small practice rooms for the largest stages in New York, and her rise is contrasted with McMoon's terror, which ranges from French-waiter simper to a hysteric requiring an immediate hypodermic of tranquilizer.

Passages of effective farce emerge—Grant hiding his mistress from an unscheduled visit from his wife, while McMoon, half-dressed and walloped by his first hangover, tries to endure the surprise. But the film suggests that only disease could explain this remarkably strange career. And the serious turn of Nicholas Martin's script is ultimately payback for the funny parts. Despite her reputation and her Oscars, this film is evidence that Streep has greater gifts for comedy than tragedy—she's most watchable when thwarted or fogbound or fatuous, with the gaga pussycat smile revealing pearly little teeth.

This is an often hilarious film, but it flattens out. Despite this, and despite the French-made pastiche of Jenkins' life, Margaret, which was released earlier this year, the glorious enigma of Jenkins stands, defiant, ready to be cracked by a defter movie.