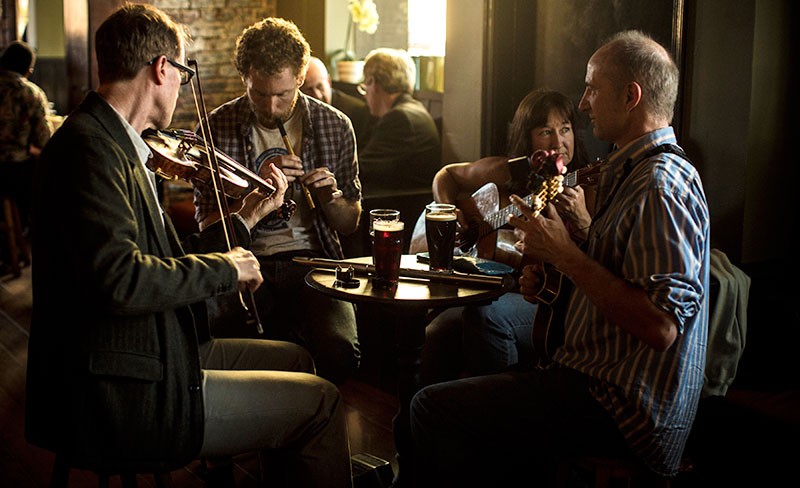 With St. Patrick's Day upon us, the North Bay shows off its Irish side this weekend at several concerts and community events on March 17, and for fans of traditional Irish folk, new Sonoma County ensemble Cularan provide a perfect melodic pairing for several rounds of Guinness and gaiety.

cúlarán is a wildflower, commonly known as a pignut in Irish Gaelic. "The boys in the band wanted to call ourselves Pignut, and I said absolutely not," laughs McLauglin. "So we came up with Cularan."

McLaughlin herself is a veteran songwriter, best known around the Bay Area as part of folk-rock band the Musers, and for her three solo albums. Last summer, McLaughlin moved from her longtime home of Oakland to Sebastopol.

"I love it up here. I spent a wonderful 28 years in Oakland, but it was time to live out in the country," says McLaughlin. "The musical community here is fantastic."

In Cularan, McLaughlin and her bandmates cover a wide swath of traditional Irish music, including jigs, polkas, waltzes and both rowdy and heartfelt folk jams.

"The repertoire is huge," says McLaughlin. "I started in on this music about 10 years ago. The more you listen, the more you pick up. It's very much in the oral tradition where people just listen and learn by ear."

In addition to performing classic compositions, Cularan also plays some of McLaughlin's originals mashed up with Irish tunes, and offers up three-part harmonies as well as intricate acoustic arrangements.

While the group is planning on a new album, the only way to hear Cularan this week is to see them live. On March 15, the band gets the weekend off on the right foot with a set at Redwood Cafe in Cotati. On March 17, the group takes over McNear's Saloon in Petaluma for the restaurant's 31st annual St. Patrick's Day Bash, performing their Irish folk amid pints of green beer and Irish-inspired food.

"Most often, we get people dancing," says McLaughlin. "The Irish dance community has got their own ways of communicating, so we'll show up and people will be ready to dance. It's amazing to watch."