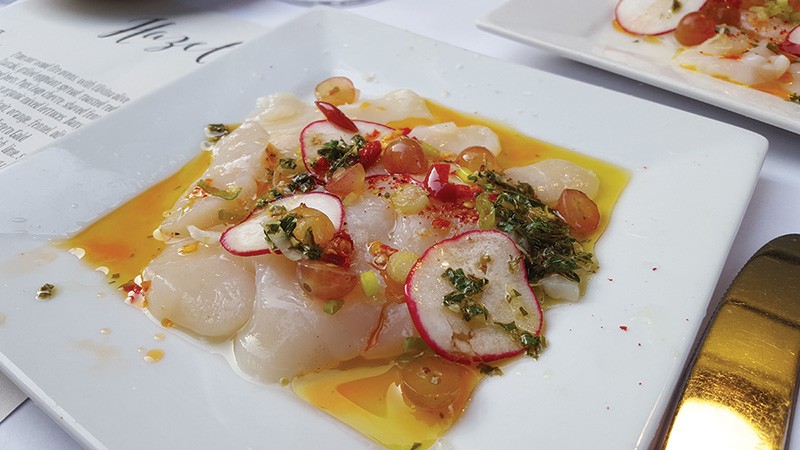 Jim and Michele Wimborough had a dream: Leave the big city and move to a small town where they could open a little restaurant of their own. They did it, and opened Hazel in Occidental six weeks ago. It's a great addition to the West County's dining scene.

The restaurant, located in what was Bistro de Copains, is an intimate, cheery place with large windows and a wood-fired oven focal point. As I walked up to the restaurant one night, smoke curled up from the chimney and rose against the backdrop of St. Philip church and the dense greenery of the western hills above, looking like a scene from New England. The nip of early fall was in the air. The cozy glow inside made Hazel an appealing place to be, a feeling that grew once the food arrived.

The menu of Mediterranean-inspired dishes reads the community well. I call it West County comfort food: wood-fired pizza, braised short ribs, roasted chicken and a variety of appealing starters sourced from local purveyors. The wines all come from Sonoma County. It's familiar stuff, but quality ingredients and skillful execution elevate the restaurant above another "meat loaf and mashed potatoes" joint. A weekday meal doesn't feel like a splurge but still qualifies as a special night out.

Starters are usually where the fireworks are, and that's the case at Hazel. My favorite was the cured scallops draped with golden Calabrian chile oil and topped with sliced radishes, spring onions, lime juice and tiny, jewel-like Bronx grapes ($9). It's a beautiful plate of food, with exquisitely balanced flavors. I also loved the roasted octopus ($11). Too often rendered as tough as surgical tubing, here I could have cut it with a spoon. The meaty flavor of the cephalopod is well matched with the creamy white beans, grapefruit and orange, fennel and olives.

Heirloom tomato salads are a menu cliché, but that's forgiven when they're as good as they are at Hazel ($8). For sheer comfort appeal, go for the fried Brussels sprouts tossed with bacon and a dusting of Estero Gold cheese ($8).

Pizzas are great. The corn pizza ($13) with cherry tomatoes, jalapeños and Pugs Leap chèvre is a standout. The crust is at once crunchy, soft inside and wonderfully rich.

Main courses hit their target, too. I'm a sucker for roasted chicken, and Hazel delivered with a succulent mix of breast, wing and leg that did time in the wood oven ($20). The crisp-skinned bird was stacked atop a satisfying cannellini bean ragout shot through with bacon, leeks and tomatoes. Best of all was the preternaturally juicy roast lamb loin ($27).

While Jim cooks, Michele runs the front of the house and turns out some great desserts ($7–$8). Pies and crisps sell out fast. Be sure to order the ridiculously creamy chocolate pot de crème.

There is outdoor seating in the front and back, but hold out for a seat inside. It gets chilly outside, and there are no heat lamps yet. And when it gets busy, which it usually does, it's easy to feel a bit forgotten. Inside is where the action is.