'Venus in Fur' puts the pleasure in pain 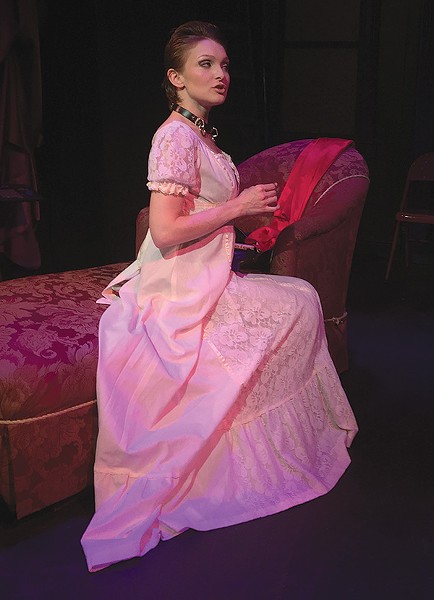 In recent years, something kinky has taken place in the world of mainstream entertainment. Sadism and masochism are now to romantic comedy what romance and comedy use to be to romantic comedy. From the 2002 comedy Secretary to 2011's three-novel series Fifty Shades of Grey, many of our favorite new "love stories" have grown conspicuously twisted.

Standing somewhere between those two examples is David Ives' Tony-winning 2010 stage play Venus in Fur, now running at Main Stage West in Sebastopol. Taking the Tony for Best Play, Venus in Fur stands as a high watermark for Ives (All in the Timing, Lives of the Saints), whose best known works—mostly short one-acts—sacrifice plot in the service of playing with language.

With Venus in Fur, he fuses his best instincts together into one, fashioning a language-rich play about a playwright-director who's just completed an adaptation of the 1870 novel Venus in Furs by Leopold von Sacher-Masoch, the gentlemen for whom the term "masochism" was named.

Thomas (in a strong, committed performance by Anthony Abate) has been auditioning actresses for the part of Vanda, an aristocratic woman who reluctantly takes a sex slave and learns to mistreat him in degrading ways. As he is about to leave, the role still uncast, in walks Vanda (Rose Roberts, pretty much astonishing from start to finish), a hot mess of an actress, dropping f-bombs left and right, desperate to audition though she's three hours late.

Skillfully directed by David Lear, with a few bold additions to Ives' original vision, this uneven but highly intelligent play has lots to say about what men and women think about men and women. Funny, thoughtful and painfully to-the-point, Venus in Fur is ultimately so good it hurts.