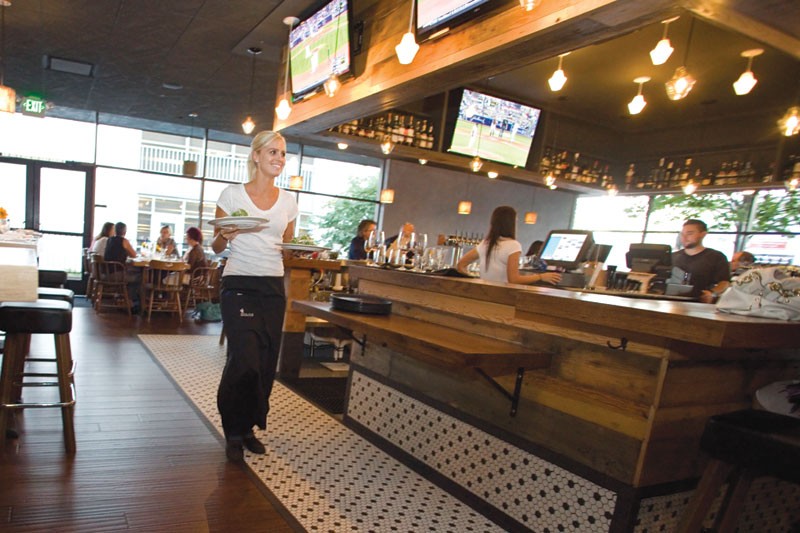 There is no freezer at the new Social Club Restaurant and Bar in Petaluma. There are ice cubes, thanks to an innovative cocktail menu that reads like a trip to the farmers market—which, it turns out, is also the name of an ever-shifting seasonal drink. But a restaurant that prides itself on serving true farm-to-table cuisine has no need to freeze anything but water.

"We're committed to serving the freshest food and keeping big companies out," manager Damion Wallace tells me, ticking off a number of the local farms, like County Line Harvest and Prather Ranch, from whom they buy food. As resident mixologist, Wallace has also created the Sunny Side Up, a bourbon-based concoction featuring Petaluma egg whites and caramelized nectarines, and a margarita with smoked Rainier cherries and lime juice.

With 30 brews, an extensive wine list and a liquor selection that includes 90 varieties of whiskey and more cordials than a debutante ball, Social Club is right in step with contemporary trends. The food, on the other hand, is more traditional, what owner Mick Suverkrubbe describes as "rustic American." The menu, which changes weekly, includes entrées like Petaluma fried chicken and mashed potatoes ($15), hanger steak ($23) and a grilled Niman Ranch pork chop with herbed spaetzle ($24). Since even the requisite mac 'n' cheese ($7) is laced with bacon, vegetarians are limited to a handful of options. Take heart: the curried cauliflower soup ($6) and Yukon potato gnocchi ($14) will surely please even the pickiest herbivorous palate.

Both Wallace and Suverkrubbe hail from San Francisco, where recent rising costs have made it harder to prosper. "We're getting squeezed by the landlords," Suverkrubbe tells me. "Five years ago, I had three businesses in the city." Now he's down to one, a nightclub in Fisherman's Wharf called the Parlor Bar.

No surprise, then, that the nucleus of the Social Club is a large center bar, made of beautifully stained cherry and white oak. "Even though most restaurateurs cringe at the huge square footage," Suverkrubbe says of the bar, "I wanted to create a casual, lounge environment." Mission accomplished. The open space echoes with the pleasing din of conversation. A Giants game plays on several flat-screen TVs, and an elevated stage sits in the corner, awash in afternoon sunlight. It's the kind of place where you feel just as comfortable dining alone as you do bringing the kids.

A native of Nebraska, Suverkrubbe grew up on a horse and cattle ranch. His restaurant career began when he was 17, in the kitchen of a local Pizza Hut. In college, he moved to the front of the house, bussing tables and bartending, which suited him better. Not quite a decade after slinging pizza dough, he became a partner in a tavern in Los Angeles.

After years of running restaurants in big cities like L.A., Boston and San Francisco, Suverkrubbe is ready to settle down in the country once again. He's drawn to Sonoma County because of the cheaper rent, abundant wineries and, mostly, the friendly folks. "Everyone has been so nice," he gushes, "from the farmers to the fire department."

An active managing owner, Suverkrubbe can be found at Social Club four nights a week, chatting with patrons, clearly enjoying his job. As he says of running a restaurant, "It's like being able to throw a great party every night."