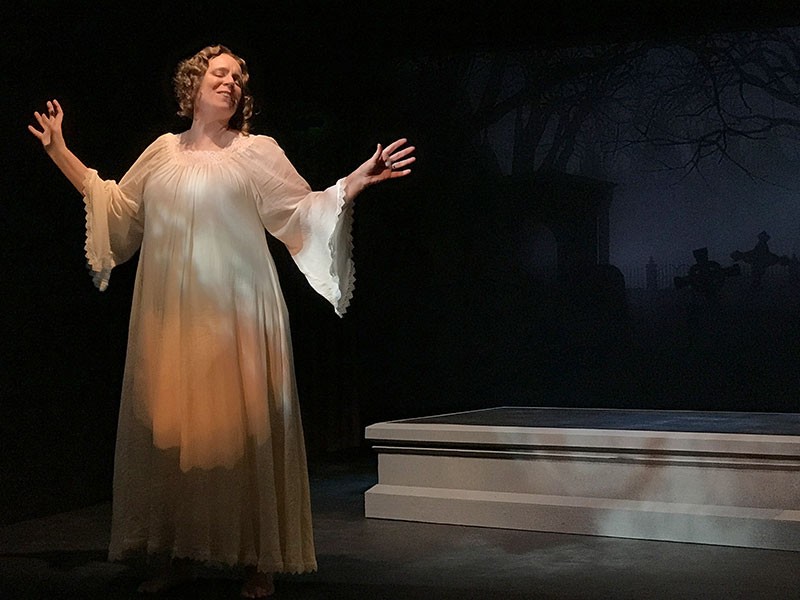 More ghost's story than ghost story, the play, adapted from Templeton's novella of the same name and directed by Elizabeth Craven, gives us a cheeky Mary Shelley narrating the story of her life from the stone slab that is now her tomb. Missy Weaver's lighting design, recreating flickering bonfires, plunges the stage into an intimately ominous landscape, but Shelley refuses to allow the melodramatic atmosphere to dampen her afterlife. Fist raised, she rails against it, meandering into a chilling narrative filled with gruesome humor and vulnerable reflections on her famous book and its creature, the rejected creation of a young student.

Visceral descriptions of icy winds and the creature's terrified awakening create a riveting experience, assisted by Doug Faxon's effective sound design, popping with thunder and pulsing electricity. Sheri Lee Miller as Shelley keeps a mischievous sparkle in her eyes throughout the sassy commentary, but is able to set aside the comedy for moments of challenging revelation. Her pain as she cradles empty air where her child's head used to rest is raw and mesmerizing in its depiction of motherhood and loss.

Templeton has the ability to bring offstage characters to life through realistic observations drawn from his meticulous research, as with Claire, Mary Shelley's sister. But Shelley's preoccupation with interrupting an otherwise spellbinding story with precise dates breaks the supernatural ambience.

Still, I felt shivers at the character's retelling of the alarming dream that prompted the writing of Frankenstein. Shelley drops dark humor into her tale, pausing to add sensational histories that explain backstories to the creature's body parts, from how he received a courageous heart to the fiendish "Washerwoman's Tale" that left the audience gasping with horror.

Gradually, Shelley reveals key events in the novel that correspond to her own life and ventures into despair over rejection by a father who refused to understand how she could love a married man, the tragic loss of her children and being cast out to wander in the gloom, suffering alone without hope of redemption.