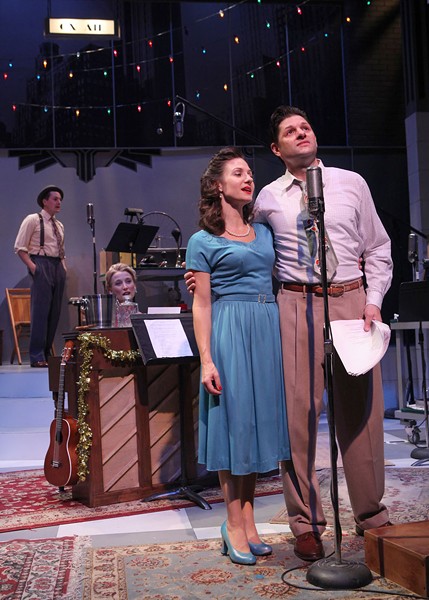 Ever since author Philip Van Doren Stern published his short story The Greatest Gift 69 years ago, George has appeared, year after year, desperate to be somebody, certain he's worth more dead than alive.

Made famous by the 1946 Frank Capra film It's a Wonderful Life, the character of George Bailey is one of the most iconic, complex and real fictional characters ever created. Frustrated by his failed dreams and lack of money, George eventually learns, through the intervention of an unorthodox guardian angel named Clarence, that his unexciting little life in the tiny town of Bedford Falls is worth far more than he ever knew.

Whether familiar or unfamiliar with the tale, audiences stand to be entertained and moved by two new stage adaptations, each serving up a wildly different version of It's a Wonderful Life.

At Marin Theatre Company, director Jon Tracy brings George Bailey's story to mesmerizing life through the talents of a late-1940s radio show troupe, performing a live broadcast from Studio A at Manhattan's WMTC radio. As snow falls behind plate-glass windows, Tracy's superb cast of five tackle dozens of voices and characters, thumping and bumping and clapping a parade of clever sound effects, and even harmonizing the vocal soundtrack.

Any concern that the emotional impact of the story might be lessened by the layered, third-person effect of watching actors playing actors playing many characters each is quickly dealt with. A good story is a good story, and the thrill of MTC's charming and engaging show is in surrendering to the building drama of George's Christmas Eve breakdown, while acknowledging the high-wire act being performed by the quintet of supremely talented actors. Even while standing before a microphone, scripts clutched in their hands, the actors weave a colorful quilt of indelible images, transcending the potentially stationary conventions of the radio-show concept.

Meanwhile, at Sixth Street Playhouse, Sylvia Jones and Craig Miller co-direct a new musical version, with memorably snappy songs and lyrics by Marcy Telles, Larry Williams and Janis Dunson Wilson, and a playful book by Williams, who also appears as George's heartless millionaire nemesis Mr. Potter. The cast is enormous, led by Mark Bradbury as George and Natalie Herman as the angel, here transformed into an artfully dodgy female street urchin named Clara, eager to earn her wings and not above picking a pocket to accomplish her goal.

Borrowing a trick from Dickens' Christmas Carol, Clara leads the suicidal, bridge-jumping George through his past to his financial-crisis present, showing the shadows of his life, allowing him to step into the key scenes that formed his small-town destiny. It works remarkably well, drawing plenty of sniffles and sympathy right from the get-go.

The cast is a bit uneven, with many weak and wobbly voices frequently neutering the melodic appeal of the jazzy songs and poignant lyrics. But even the occasional off-key delivery is not enough to squash the sneaky power of the piece.

The story of George Bailey suggests that a person's life, flawed or not, is best judged by the impact that person has on others. The same is true of this bumpy but deeply moving show, grabbing the hearts of the audience from its tearjerker of an opening number—with the people of Bedford Falls all praying in song for their aching friend George—right up to the final throat-catching wallop of a holiday toast: "To George Bailey, the richest man in town!"