The Lost Church is here to save Santa Rosa's musical soul

The Lost Church is located at 427 Mendocino Ave., Santa Rosa. For tickets and information, visit thelostchurch.com. 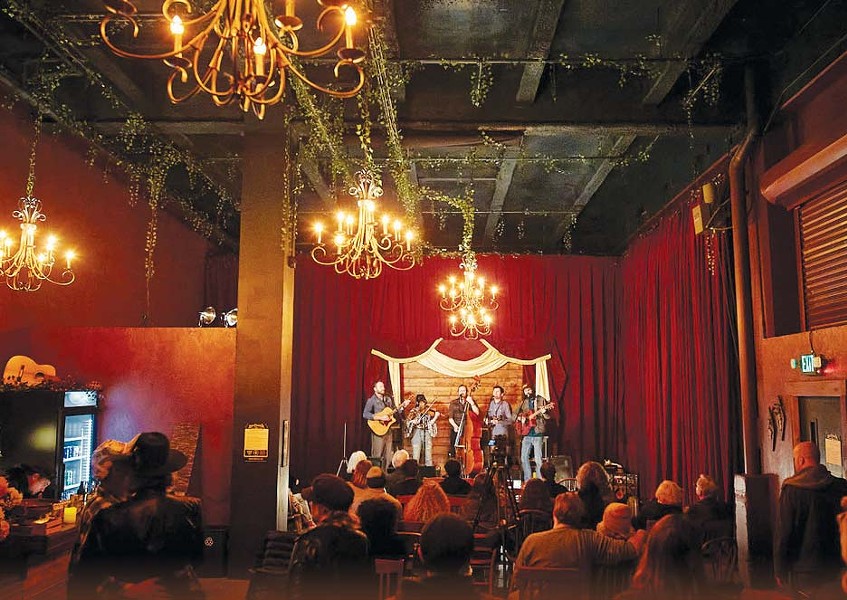 David Bowie once said, "Music itself is going to become like running water." He was talking about how people never think of their tap water: They wash dishes in it, they drink it and the water becomes so commonplace that it's taken for granted until it's not there.

For many artists and audiences in the North Bay, the tap for live-music experiences in downtown Santa Rosa has been stuck on low-flow for some time. And people are starting to notice.

Make no mistake, there are a number of bars, clubs and coffeehouses in town that host bands; but for intimate, engaging concerts in a devoted theater space, nothing has quenched Santa Rosa's musical thirst quite like the newly opened nonprofit venue the Lost Church.

Located on Mendocino Avenue, three blocks off of Courthouse Square, the Lost Church is a 99-person, fully seated listening room that follows in the footsteps of the San Francisco venue of the same name.

That original venue, located in San Francisco's Mission District, is the brainchild of musicians Brett and Elizabeth Cline, who took their irregularly shaped house and turned the living room into a venue.

When the Clines began looking to expand their Lost Church into a multi-venue project, they contacted North Bay musician, producer and promoter Josh Windmiller, whose work includes founding and running the popular Railroad Square Music Festival (returning on June 14, 2020) as well as playing in bands such as the Crux.

"I never thought I'd be the venue guy," says Windmiller. "But this is a perfect fit for me. I want to create art, be around artistic people and I want my fellow music makers to thrive."

When Windmiller met Brett and Elizabeth and found out they wanted to expand their theater model to other communities and make them sustainable, nonprofit ventures, he jumped at the chance to help make it happen.

""This is our proof of concept, to show that spaces like this are possible in our community," Windmiller says.

In the works since late 2018, the Lost Church boasts warm acoustics, charming décor and a focus on live music, with a stage set under chandeliers and vines.

"The whole thing feels like a post-apocalyptic cabaret space," Windmiller says. "It feels like we've sequestered ourselves in this building where vines are growing, but we've decked it out with beautiful art and stained wood and intimate lighting, and it has a good vibe."

While Executive Director Brett Cline was a driving force in the building and design of the Santa Rosa venue, the running of the theater is entirely in the hands of the North Bay community. On the ground floor of the project from day one, Windmiller is now the venue's development director.

"The San Francisco people aren't going to begin to pretend that we don't have a pretty awesome scene up here," says Windmiller. "And honestly, the only thing we have a dearth of is places to play—there is an unequal representation of artists to venues. We have some really great venues, but not enough of them that can take a risk on up-and-coming artists and not a lot that can host a show in a place that is this intimate."

"I like the aspect of what they are trying to build there, in that it seems to be music focused," says Philip Pavliger, a Santa Rosa photographer who works with Windmiller on events like Railroad Square Music Fest. "Santa Rosa has a fair number of venues, but there didn't seem to be a place where local artists could go to try out new material in front of an audience."

When Pavliger heard about the Lost Church, he took the chance to shoot a new exhibit, "Rhapsody of Nine," featuring photo portraits of local musicians in the venue. The photos are currently on display nearby at Acre Coffee on Fourth Street.

"There's an amazing amount of talented people here in the area," Pavliger says. "For me the idea is to help support and grow something I think the city could really use."

So far, the Lost Church has consistently hosted attentive and enthusiastic audiences, and Windmiller says the venue is ideal for smaller acts, solos, duos or stripped-down bands because they don't have to try to cut through distractions.

"There's definitely a place for cafes, clubs and bars—those are some of the main places I've played with the Crux," Windmiller says. "But there's a certain vibe and experience that one finds in a theater, and this is a small theater, this is a parlor room, and that's so exciting to be creating here.

"Our belief and our conviction is that live experience can be sustained, loved and can grow through being different from those experiences that we find in the digital era. Where Netflix and YouTube can provide privacy and distance from the performer, live experiences can provide intimacy, engagement and evenings with the community and art that will be unforgettable. What we need to do is sustain a place where new acts and even established artists can have those experiences with an audience.

"Maybe the time we're living in is post apocalyptic, maybe the internet has destroyed the world like a robot uprising, and indeed we are creating a theater from the ruins of the old world."