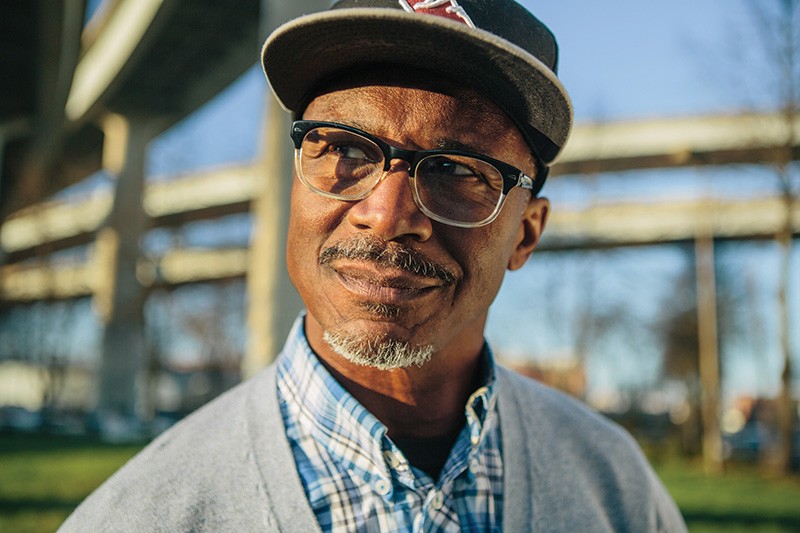 The San Diego–based saxophonist and songwriter was turned on to the soundtrack for Meyer's largely unknown exploitation film Cherry, Harry & Raquel! by his vinyl-collecting bassist Chris Stillwell, and was intrigued by the funky, dirty jazz of the score. Working a bombastic arrangement of the song "Grenadiers," Denson and his band, the Tiny Universe, transformed the playfully steamy tune into the opening track of the record.

"We've always been interested in old things to cover," says Denson in an interview. "I really depended on Chris [Stilwell] to find these tunes, since he's such a record hunter. In doing this, I also realized big orchestration was something I wanted to do more of."

To that effect, Denson went big for New Ammo, enlisting a troupe of horn players to attach a big band sound to these gritty grooves culled from the past. Other tracks from cult film scores pop up on New Ammo, including "The Duel," a densely layered melody from the 1970 biker film C.C. & Company.

New Ammo also features a slew of more current pop covers. "Sure Shot," originally a Beastie Boys track, is treated to a funky, flute-powered performance. Songs by Cold War Kids and the White Stripes also get the Denson treatment, along with a host of original tunes.

Released in February of this year, New Ammo is a record heralded for its compelling new formulas on Denson's routinely roots and jazz music. For the past 30 years, Denson has performed in a variety of outfits, including Lenny Kravitz's band, and recently has appeared alongside reggae funk band Slightly Stoopid, who insisted on releasing New Ammo on their own label, Stoopid Records.

With Denson's own longstanding project, Tiny Universe, he gets the chance to switch things up at his whim, and this week Denson comes to North Bay with a new set of music and featured players for two nights at Sweetwater Music Hall.

"I started playing guitar a couple of years ago," says Denson. "In that process, I decided to bring more strings to the band, and we're doing more stuff that's pointed toward the blues."

With that in mind, Denson has recruited master slide guitar player Roosevelt Collier to accompany the band. Collier, a Florida native, is renowned for his lightning-fast work in his own family band, the Lee Boys, and this week he puts the pedal steel to the metal when he joins the Tiny Universe for a contagious feel-good time.