'Star Wars' is back, with a heavy emphasis on war 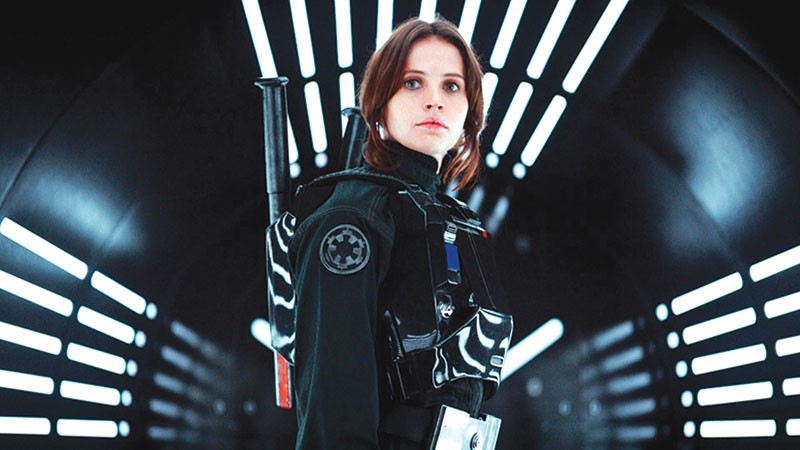 The stand-alone Rogue One: A Star Wars Story is a WWII movie in space. The finale is set on the planet Scarif, a world of surf and tropical reefs; the attack wings shooting, bombing and crashing are like a futuristic version of Pearl Harbor.

The film is set during the rise of Lord Vader and Grand Moff Tarkin. Tarkin is played by Peter Cushing's digitized ghost. It's hard not to stare at the apparition of an actor dead for 22 years—the movements are a little artificial, but it's him, all right. No one had seriously thought the grave could hold Peter Cushing, anyway.

Rogue One answers a question that's been plaguing geeks for decades: why did the Death Star have a design flaw, so similar to the ever-convenient self-destruct button in spy movies? Having answered this, director Gareth Edwards races along to the climax of a dangerous mission, carried out with a mixed cast of funny-name bearers. Central to it is Jyn Erso (Felicity Jones, as determined and rabbitty as ever).

On a nearby planet, the Jedi's towering main temple is abandoned, but it's being salvaged for a mineral or something called kyber, which fuels both light sabers and the Death Star. Rebels join Jyn to become the crew of a battered Imperial freighter stolen and renamed Rogue One.

The Empire shoots back, for once, and with accuracy. The movie is all action, hopping from planet to planet, and blasting all the way, which makes it faster and more serious than anything in the series.

This seriousness makes Rogue One less uplifting than last year's Force Awakens. One really wants to leave the recent election out of this experience and forget our desperate times. This is difficult, given the huge emphasis on revolutionary self-sacrifice and battle lines being drawn; it's an unpleasant kind of Zeitgeist offered here, offering premonitions of possible struggle to come.

'Rogue One' is playing in wide release in the North Bay.