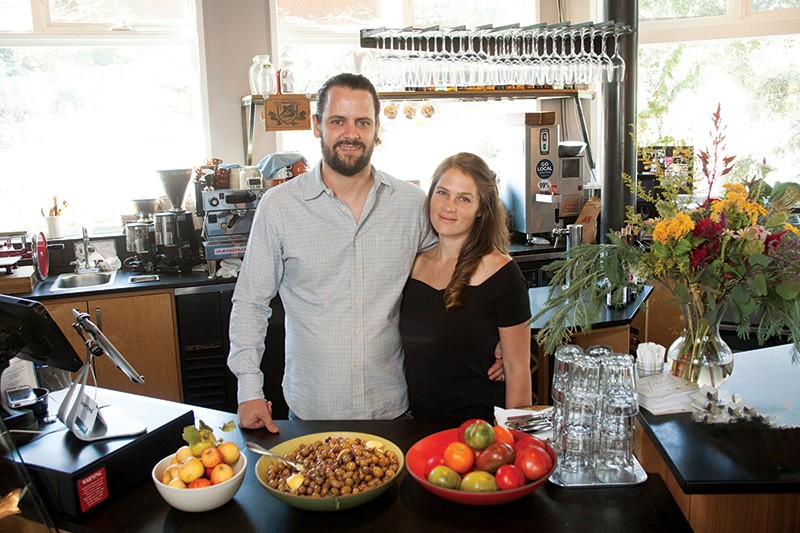 The Sonoma County Board of Supervisors and local governments around the country have taken up demands for raising the minimum wage. California will up the state minimum wage to $10 an hour in January, but Peter Lowell's restaurant in Sebastopol isn't waiting.

Last month, the restaurant instituted a 20 percent service charge and eliminated tipping for servers. They also raised prices 10 percent. Now, says owner Lowell Sheldon, the restaurant can offer servers and kitchen staff a living wage and health benefits. Dishwashers now earn $16 an hour. Cooks make between $17 and $20 an hour, and servers, between $22 and $28.

The move is a first in Sonoma County, and part of a growing Bay Area movement.

Sheldon and his partner, Natalie Goble, have been thinking about the change for several years and were influenced by the examples of the Boonville Hotel and Oakland's Homestead restaurant. The Boonville Hotel's restaurant has a 15 percent tip added on to all checks, while Homestead raised prices 20 percent and eliminated tipping.

Sheldon and Goble's reasons for the new policy are varied. Sheldon says he wanted to figure out how to pay his kitchen staff a better wage. Cooks are generally paid less than servers and often don't stick around very long, especially now with low unemployment.

Sheldon says the move was also a philosophical one.

"What kind of atmosphere are we trying to create?" he asks. "I want an atmosphere that fosters our principles."

Peter Lowell's restaurant has made its name with hyperlocal wines and produce sourced from west Sonoma County organic farms and backyard gleaning. In a sense, the new policy brings its wage structure in line with its sustainability-minded menu. Sheldon says the change is the centerpiece of an effort to rethink how the restaurant treats its staff and engages its customers and the larger community.

"Part of what we see our customers wanting is innovation across the board: the daily changing menu, vibrant wine list composed of naturally made wine, our own produce farm," Sheldon says. "It's kind of a way of life for us. The spirit of growth and change keeps our customers interested and invigorated.

"It's with this spirit that we are implementing the change to the way our staff is compensated," Sheldon continues. "It gives our servers an opportunity to engage in a conversation with our customers about the way things have always been and a way they can be improved."

Peter Lowell's customers were already tipping an average of 14 percent at lunch and 21 percent at dinner, so the service charge should not come as a shock. But since tipping also lets diners communicate their experience, the new system might make them feel as though they have less power.

For Goble, tipping was an imperfect system. A good tip might reflect good service and good food, but the benefits and message flowed only to the server. A bad tip means a waiter takes home less money, but the problem that may have caused a customer's dissatisfaction (slow service, poor food, a long wait) doesn't get addressed because it isn't communicated to management.

Sheldon and Goble hope the new policy will facilitate better communication with diners. Sheldon now gives customers his email in hopes they will give him direct feedback.

Under the new policy, regulars who tip big won't get more attention than anyone else. Ideally, all customers will get the same level of service since there will be no more big tippers—or any tippers.

Goble says the new policy will require that the staff earns that 20 percent charge. "It challenges our staff to perform at the level," she says.

It's a bold move and an interesting experiment into economics and psychology. Will customers embrace the idea? Will servers adjust to life without tips? Will turnover in the kitchen be reduced?

So far the response has been overwhelmingly positive, say Goble and Sheldon.

That's been the experience at Farmstead. The restaurant launched its no-tipping policy in March, and it's been a success, says owner Fred Sassen. The change was sparked by Oakland's move to raise the minimum wage to $12.25 earlier this year.

"This allows everyone to be compensated fairly and equally," Sassen says. "As a cook, you could never come close to making what a server makes. You were stuck in a career without a forward path." Now all employees have "access to the opportunity to make the same."

Oakland and San Francisco are leaders in this movement, and other cities have their eyes on them, Sassen says. Now that Peter Lowell's has jumped in, there will be attention on them as well.

"For us, it's not good enough to be successful from a business standpoint," Sheldon says. "We need to be part of a culture that challenges the norms and, at times, breaks through to new places in our society."