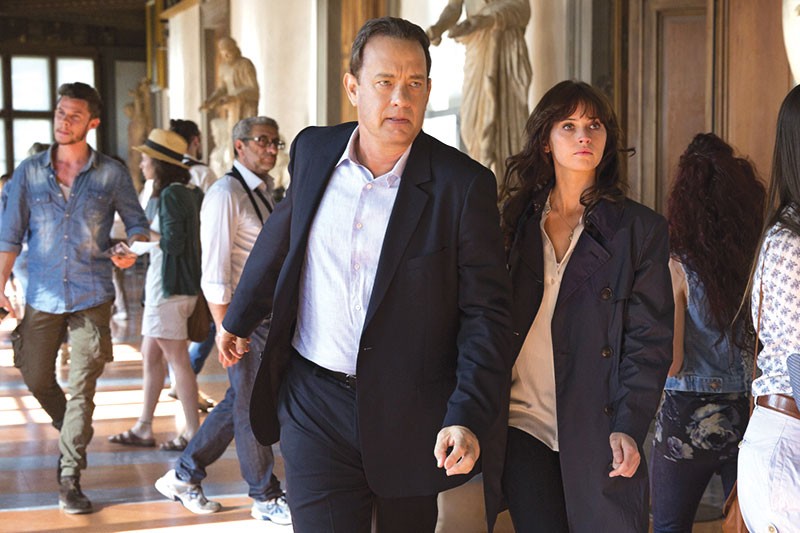 It's weird seeing Tom Hanks trying to emote so seriously in Inferno after witnessing one of his finest performances ever, as David S. Pumpkins on the SNL sketch "The Haunted Elevator." No dancing, unfortunately, in Hanks and Ron Howard's follow-up to The Da Vinci Code and Angels & Demons.

Inferno is more interesting than its predecessors, though it's just as preposterous. Our two-fisted symbologist Robert Langdon (Hanks) is struck with amnesia after taking a bullet to the head. He wakes up in Florence, tended by British physician Sienna Brooks—a prodigy of art history and medicine—played by Felicity Jones with the antiseptic, no-nonsense quality that Julie Andrews brought to the spy movies she occasionally made.

The trickery begins early, with an opening grabber: a man named Bertrand Zobrist (Ben Foster) is cornered atop a Florentine tower, and he leaps for it. Zobrist, we learn, was a zillionaire with an agenda. The dead plutocrat wasn't just a wealthy TED lecturer talking about overpopulation; he was taking action, through creation of a bio-plague that would make some much-needed elbow room on the planet.

The plot thickens with the introduction of a SPECTRE-like "security group" headed by Harry Sims (Irrfan Khan), as well as investigators from the World Health Organization. All seem in pursuit of the same deadly vial, and Langdon has to parse clues concealed in objets d'art to find the virus, where it waits in its UNESCO world-heritage hiding place.

Unlike the first two Dan Brown adaptations, Inferno doesn't confront religious belief—except maybe to please the kind of audience so opposed to population control that they think condoms equal genocide. The conspiracy is as essentially secular as an evil scheme in a Bond movie, though the 007-style components and scenery changes here don't really fit together. Inferno may be twistier, faster and less smothered with details than the first two Brown adaptations, but it's always on the edge of real fun, and it never crosses over.

'Inferno' is playing in wide release in the North Bay.