Appreciating the cultural phenomenon of 'Planet of the Apes'

The series is safe as an entertainment for older children—2011's Rise of the Planet of the Apes had deft, kid-pleasing sequences of Caesar the chimp in his Curious George phase, brachiating around a Victorian house in San Mateo. And yet the series is apocalyptic in its implications, drastic in its premises. A barrel-of-monkeys amusement, it foretells the human race's end in a tale of Ambrose Bierce–worthy bitterness that makes sure we deserve that end every time.

Dawn picks up 15 years after Rise. The super-intelligent chimp Caesar (emoted by the peerless synthespian Andy Serkis) has parted ways with his scientist foster-father James Franco. Caesar is now the leader of a tribe of mixed hominids: escapees from a cruel gene-tech lab in South San Francisco, the evil San Bruno Primate Shelter and an unnamed Bay Area zoo. After a terrific man/monkey battle on the Golden Gate Bridge, the apes relocated to the tallest timber in sight, Muir Woods and Mt. Tamalpais. 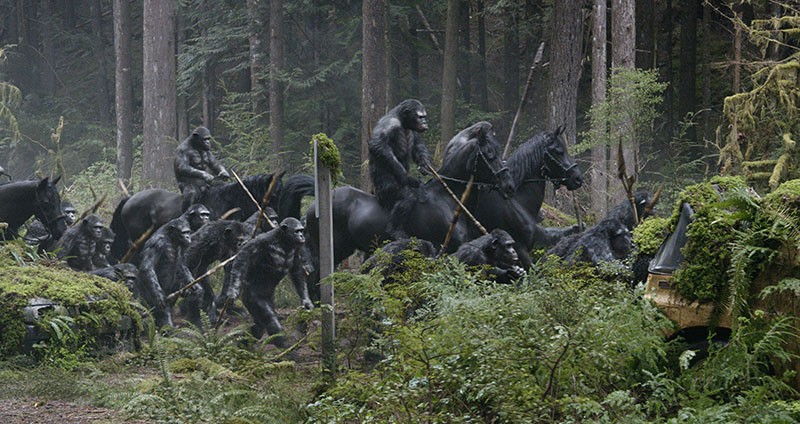 In our near future, San Francisco is a mossy ruin, and few humans remain after a global outburst of ape-transmitted hemorrhagic fever has cleared the planet. The question facing the survivors was posed some time ago, on the poster of Beneath the Planet of the Apes (1970). The tagline paraphrased the "House Divided" speech of Abraham Lincoln—portrayed as an Ape-raham Lincoln in the finale of Tim Burton's underwhelming 2001 remake of Planet of the Apes. As Old Abe almost said: "Can a planet long endure half human and half ape?"

In Planet of the Apes (1968), American astronauts land on a planet where the great apes have evolved and humans are post-verbal. Ape-human coexistence was given the same earnest poring over that racial politics got in that dead era: Were we moving too fast? Would you want your sister to marry a human? The problem of humans is mulled over by liberal chimps, clerical orangutans and martial gorillas.

During the shooting of the original 1968 film, director Franklin Schaffner encouraged the code phrase "NP"—"no polemics"—whenever it looked like the politics was showing too much. The warning failed: this multi-film series played the race card with Ricky Jay–worthy dexterity. Eyeing the sequels of The Planet of the Apes, the film's star Charlton Heston worried in his diary: "Very political, very '60s political."

The original, made in a year of political strife as bad as our own, is a stunner. Count the ways: Jerry Goldsmith composed the soundtrack with barbaric brass and eerie, tinkling cymbals. Former blacklistee Michael Wilson and conscience-of-America Rod Serling wrote the script, and the deft stunt work and the southwestern locations framed some heavyweight actors.

Shakespeareans and other legitimate theater types played the ape gentry, including Maurice Evans, the most piss-florid Macbeth ever seen on screen, as the skeptical Dr. Zaius. Representing mankind: Heston.

In this movie of vast space-time travel, bigotry and war-fever, Planet of the Apes was a sci-fi fire sermon, complete with a jeremiad from the Ape Bible, Scroll 29, verse 6: "Beware the beast, Man, for he is the Devil's spawn. Alone among God's primates, he kills for sport, or lust, or greed. Yea, he will murder his brother to possess his brother's land. Let him not breed in great numbers, for he will make a desert of his home and yours. Shun him; drive him back into his jungle lair, for he is the harbinger of death."

I saw Beneath before I saw the original Planet. It was my quintessential drive-in movie experience, in the middle of nowhere among the silage and abandoned oil patches of Seminole County, Okla., on a scalding summer night.

First came an appetizer of political satire, a demonstration of pacifist chimps with picket signs seeking "peace and freedom"—this some years after the actual Peace and Freedom party had been established. Then the main course, the hallucinations of the Forbidden Zone in the year 3955: upside-down crucified gorillas in flames; the tottering colossal statue of the Lawgiver weeping tears of blood. Finally, the last black mass of the masked mutants, worshipping their sacred doomsday bomb on the altar of the ruined and subterranean St. Patrick's Cathedral.

All of this crypto-Catholic insanity is topped by the ape planet's obituary, pronounced by the voice of doom, Paul Frees. Everyone, and I mean everyone, dies.

Escape from the Planet of the Apes goes more explicitly into America's race-hatred. In Escape, the enlightened chimps Cornelius (Roddy MacDowall) and Zira (the late Kim Hunter) heist the spaceship left by the human astronauts and head back to Earth 1973 via wormhole. There they become celebrities, but Zira's pregnancy—and the revelation of an ape-dominated future—causes the couple to flee for their lives from hate-mongering humans.

If you're literal-minded, the seriously disgusting idea that black people are being likened to apes could cross your mind, given the way the series delineates human-ape bigotry. You don't have to be made of plastic bricks to appreciate The Lego Movie, and oppressed minorities understand metaphors as well as anyone. Mort Abrahams, who executive-produced the first movies in the series, liked to recall how Sammy Davis Jr. himself told Abrahams that the films were "the best statement of the relationship between blacks and whites I've ever seen."

Zira and Cornelius' son, Caesar (MacDowall again), survives in Moses-like concealment and becomes the star of Conquest (1972). There, we learn that a virus killed all the dogs and cats on earth. Apes are imported from Africa to give pet-craving Americans something to cuddle. Of course, when they get too big, they're trained as slaves—butlers, personal assistants and janitors. As the apes are manhandled and cattle-prodded, a revolution brews.

One writer, Sam Greene, described the wrath to come as "a simian version of Nat Turner's insurrection." In an armed uprising, Caesar leads the apes against the troops of an evil fascist governor of California, while the governor's assistant (Hari Rhodes) pleads for sanity.

Executive producer Frank Capra Jr. later admitted that the fiery revolt in Conquest was modeled after footage of the Watts riots. When it was test-screened in Compton, not so very far from Watts, the crowd in the theater got the point. They became so energized that the frightened 20th Century Fox executives went back and recorded an addendum to Caesar's apes-in-triumph speech: "And we shall found our own armies, our own religion, our own dynasty! And that day is upon you now!" The ape general has second thoughts, and decides to go milder, promising to work with the conquered humans.

Of course, humans can't be trusted to keep the peace. The bomb is brought out to tame the monkeys—that occurs in the post-civilization follow up film Battle for the Planet of the Apes. The road cleared to a future world in which intelligent apes rule humans, rounding them up, shooting them, spaying them and vivisecting them.

There was still a TV series and a cartoon series left before the epic wound down. Even so, we can still watch it with pleasure and terror, knowing it's more likely that man will drive the great apes to extinction than the other way around.

On the evidence of one movie, this relaunched Planet of the Apes series will continue to be intelligent—the last one was a careful, affectionate renovation of an old edifice instead of a demolition. The criss-crossed time-streams of the original are honored in the way the series makes references to its roots. The fire hose used on Caesar in Rise is similar to the fire hose used on Charlton Heston in the first Planet of the Apes film 46 years ago: both times it was a symbol of an infamous moment in the civil rights' protests. The betrayed, incredulous Caesar in Rise faced an ordeal that could have been titled 12 Years a Chimp—the stripping down and imprisonment of our hero was not just effective, it was enraging. And there was payback. It did get to be Nat Turner time.

Again and again, in creative new ways, the Planet of the Apes series puts you on both sides of a revolution, teaching lessons about peace, tolerance and rebellion—lessons of the sort you likely wouldn't have cared to have been taught by a monkey-free movie.