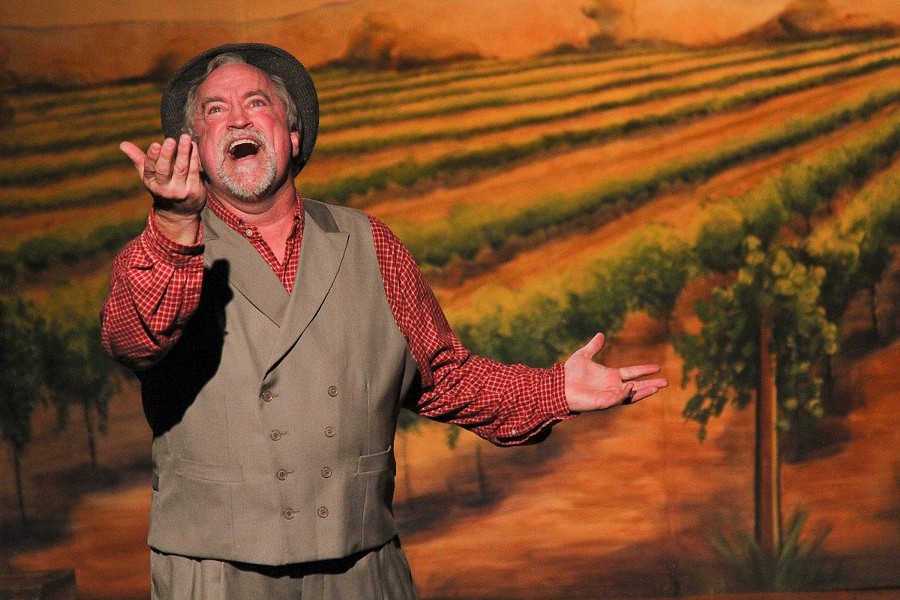 It’s been 12 years since Stephen Walsh last played Tony the grape grower, in the classic Frank Loesser musical ‘The Most Happy Fella,’ at Cinnabar Theater. And to employ an over-picked cliché, in his second run of the show at Cinnabar, Walsh has only gotten better, deeper and rich—like a really, really good, well, you know.

The show itself—about romantic complications arising when the much older Tony, an Italian wine-maker in Napa, impulsively leaves a love letter for a San Francisco waitress—is a blend of fantasy romance and soap-opera heartbreak. It’s like something John Steinbeck might have written if asked to pitch an idea for a musical about love.

Nicely directed by Elly Lichenstein, with her patented knack for filling the stage with things to look at, the production pivots on the performance of Walsh, who not only sings gorgeously, but nails the role of a love-struck sweetheart who believes he’s too old and unattractive to deserve happiness. Walsh makes Tony’s emotional journey so believable it’s impossible not be happy when happy and devastated when his desperate attempt at love hits snags, which it does from the very beginning.

This is hardly light and fluffy musical material. There is real human drama here, and the music—with the exception of the poppy ear-worm ‘Standin’ on a Corner’— is complex and operatic, beautifully light and dark, bubbly and haunting, and occasionally a bit weird. This is the kind of show in which people sing whatever is in their soul, even if that means singing a single name over and over and over.

As Amy—who Tony seems to think is named Rosabella—Jennifer Mitchell is charming. She’s especially strong in the early scenes where she is tricked—due to Tony having sent her a photo of his foreman instead of himself—into believing that her coffee shop pen-pal is the young and handsome guy she recognizes from the photo when she arrives at the vineyard. She’s there in Napa, having impulsively agreed to marry the man she’s been swapping letters with. Mitchell sings beautifully, and plays the early flirtations of love and attraction to lovely effect.

When she learns of the deception, a series of actions take place that steer the tale in the direction of tragedy, but never leaves us doubting that true love might somehow be possible for Tony, one way or another, no matter how unlikely.

Michael Van Why, as Tony’s optimistic farmhand Herman, is magnificent—like the Scarecrow of Oz crossed with Curly from ‘Oklahoma’—and his guileless courtship of Amy’s friend Cleo—a power-force performance by Krista Wigle—is a nice balance to the rockier romance of Tony and his “Rosabella.” The music, played simply on two pianos and a set of drums, is nicely directed by Mary Chun.

There are many reasons to see this show, but in the end, it all comes down to Walsh, who returns to a favorite role after a dozen years, and somehow makes it even better, giving one of the best performances of his career, and easily one of the North Bay’s best musical productions of 2016.