6th Street production is all about the music 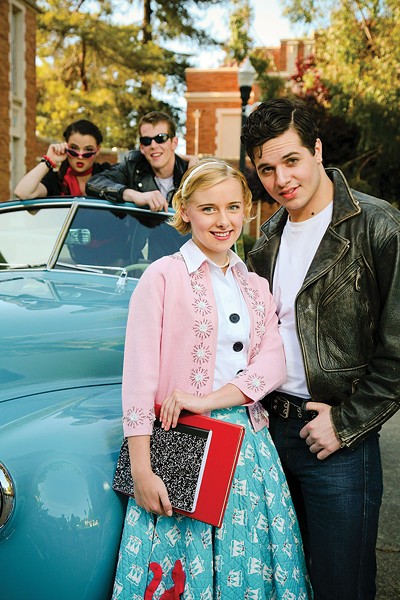 Grease, the musical, written by Jim Jacobs and Warren Casey, is a modern miracle of the stage—a show that retains its popularity after over 30 years, despite the fact that, aside from a few good tunes, it's a fairly terrible play. Let's just get that fact out of the way.

When Grease first appeared in 1971, it was a raunchy, edgy, dangerously subversive attempt to show that our nostalgic view of 1950s teenage innocence was all smoke and mirrors. As such, it was something special. Since that initial version, beginning in 1972 with the play's move to Broadway and on through to the hit 1978 movie and a series of subsequent revivals, the edgy material has been tamed down. What remains is a series of broad vignettes about cartoonish teenage stereotypes, interspersed with ballads and song-and-dance numbers.

Which brings me to the current production at 6th Street Playhouse. Using one of the latest script dilutions, the sprightly, effervescent cast, under the direction of choreographer-director Staci Arriaga, puts on a first-rate dance show, supported by some outstandingly good singing voices.

The musical numbers, easily the best I've seen in a community or college-level production, are so good that I found myself longing for the next one to begin during the play's many "talking sequences." The story of tough guy Danny Zuko (Anthony Guzman, consistently entertaining) and his on-again, off-again courtship of good girl Sandy (Amanda Pedersen, miscast, but with a great voice that somewhat makes up for it), Grease may once have had something to say about the joys and troubles of being young, but most of what was once truly insightful has been weeded out.

Though amusing, the characters are now so over-the-top they make the kids from Scooby Doo look like something from an Arthur Miller play. Fortunately, supporting players, including an outrageously good April Krautner as sex-kitten Marty, acrobatic Trevor Hoffman as the car-loving, gang-fighting delinquent Kenickie and Sidney McNulty as the endearing drop-out Frenchy, at least make these sequences watchable.

The reason to recommend Grease, though, is those musical numbers. With strong musical direction by Nathan Riebli and a sensational band, the show soars every time it sings, which, thankfully, is often.