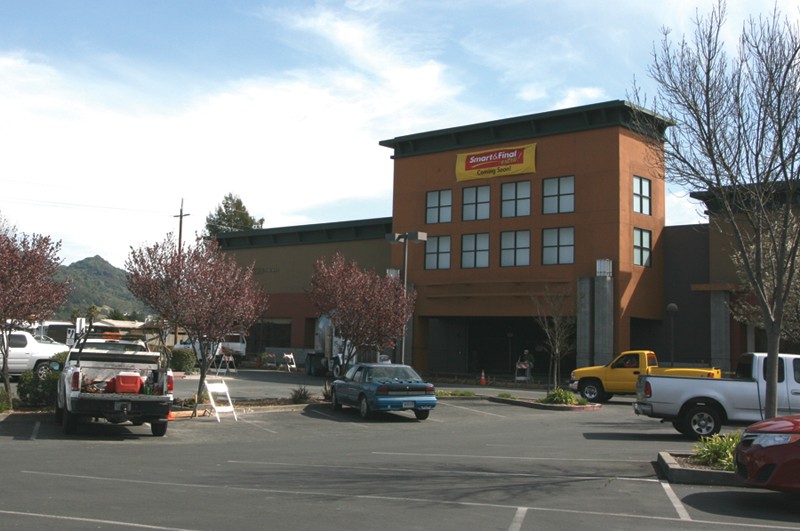 On Sept. 18, Santa Rosa's city council adopted a plan to facilitate the opening of grocery stores in the city's USDA-designated food desert, which stretches between Rohnert Park and Highway 12 along Santa Rosa Avenue. The city amended zoning codes so that food vendors re-tenanting existing spaces won't need to apply for a conditional use permit; these permits cost around $12,000 and require a public hearing.

In October, Santa Rosa's Living Wage Coalition filed a lawsuit against the city for this move, claiming it violates the general plan and will allow new stores to open without the necessary environmental and public considerations.

"We don't think this was about getting healthy food to low-income people," says Marty Bennett, co-chair of the Living Wage Coalition (LWC). "We think it was about giving a free pass to a developer, and potentially we thought a Small Mart [smaller grocery stores operated by Walmart] could come into the vacant Circuit City building."

In 2011, the multinational chain announced its intent to open between 275 and 300 stores in federally designated food deserts, stating, "We believe every single person should have access to an abundant selection of fresh fruits and vegetables at an affordable price."

The superstore, however, pays poverty-level wages—a national average of $8.81 an hour—employs roughly one-third of its employees without benefits and exports the majority of its earnings to its Bentonville, Ark., headquarters, creating a robust case that the city council's quick-fix answer may hurt food deserts more than it helps them.

"We don't think Walmart can solve the problem of low-wage people getting access to healthful food," Bennett says.

But according to assistant city attorney Molly Dillon, the Santa Rosa City Council's amendment was merely a response to the food desert designation. The superstore has not approached the city about opening in its southeast quadrant, she says.

"So far as I know, there was no application from Walmart nor any contact with Walmart about the area along the Santa Rosa corridor," she says.

A Smart & Final store was approved under the new, relaxed zoning code, and is set to open in the old Circuit City building along Santa Rosa Avenue.

Nevertheless, a proposed settlement has been drawn up between Santa Rosa and the LWC. The coalition stipulates that if the city throws out the amendment and reinstates its former zoning requirements, it will not press the lawsuit. According to Dillon, staff plans to recommend that the council comply with the terms of this settlement at a city council meeting on March 19.

"The pending litigations would be expensive for the city in time and resources that could be better spent elsewhere," she says. "And there is some relief in that area now—one additional resource [Smart & Final] that was not available."

Under the terms of the potential agreement, Smart & Final will be allowed to go forward as the only store to have taken advantage of the city's relaxed zoning measures.

"We're prepared to fully comply with the terms of the settlement," Bennett says.

In a strange twist to this story, a spokesperson representing Walmart contacted the Bohemian through email on Feb. 27, asking about the paper's upcoming story on "food deserts in Santa Rosa." The Bohemian had not approached the superstore prior to receiving this inquiry. When asked why Walmart believed the Bohemian was working on an article, the representative replied that "the Living Wage Coalition posted something about it."

But according to Bennett, nothing was ever posted on the LWC's website or social media pages. Their only mention of this newspaper was a line written in the organization's private email list, forwarded out to 250 people on Feb. 23—one of whom, it would seem, has an inside connection to Walmart's communications team.

The spokesperson responded to questions regarding where such information came from, saying, "I can't tell you . . . it was forwarded to me. That's funny how that happens, huh?"

The spokesperson also said Walmart had been under the assumption that the Bohemian was writing about a different lawsuit involving the superstore in Rohnert Park, and added that Walmart had no comment on the food-desert issue in Santa Rosa.

This directly contradicts Walmart's initial email and is without precedent; the store has directly engaged on the food-desert issue in the opinion pages of the Press Democrat.

The Bohemian invited further comment from the chain and has yet to hear back.