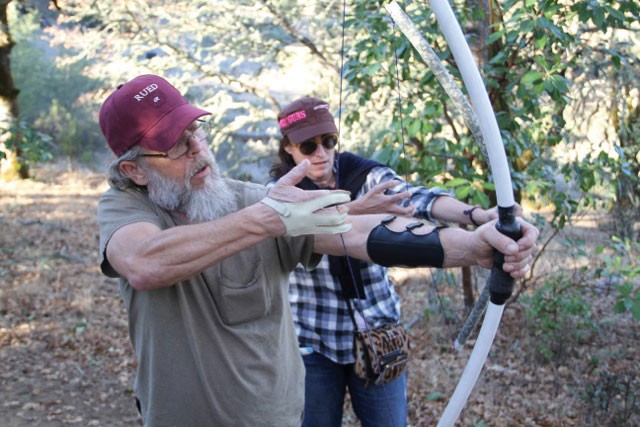 Two years ago, Jennifer Durban and Stephanie Callimanis were coming home from a trap-shooting event in Mendocino County when they decided to organize a gun-safety project near their hometown of Healdsburg.

"We had a strong interest in hunting, from the food perspective, and networking to increase our knowledge about it," says Durban, "so we pulled community resources together."

The idea took off and has grown into a different kind of social club: the Dry Creek Gun Club.

Durban is a set decorator who divides her time between Healdsburg and Los Angeles. Callimanis is a project manager and nonprofit coordinator who lives in Dry Creek Valley, home of the club's unofficial "office"—the Dry Creek General Store bar in Healdsburg.

"We had this goal of hunting a wild boar and breaking it down ourselves," explains Callimanis. "The club evolved from there. That's why you see the boar on our logo."

In the age of Meetup.com, where anyone can find a social club for the most esoteric interests, the Dry Creek Gun Club (DCGC) is deliberately low-key and based on good old word of mouth. Every new member must be endorsed by an existing one, and three hours of volunteering for the club each year are required. An annual membership of $30 partially finances keynote speakers and activities, as well as cool T-shirts. The age of the club's members ranges from 20 to 70. Half are women. The humble website (drycreekgunclub.com) announces future events, but joining takes more than just filling out one line. Questions range from "What homesteading, survival or other skills can you offer?" to "What do you think about guns?" The latter question addresses the inevitably loaded context surrounding gun ownership and regulations.

"A love of guns is definitely not a requirement," stresses Callimanis. "Many people in the club do not own guns. However, we do ask that people respect hunting and the right to hunt for food." Accordingly, some members stress firearm education and diplomatically differentiate "hunting" from "self defense."

"I never grew up with guns and was scared of them due to lack of information," says Healdsburg member Lindsay Jackson. "However, DCGC changed my viewpoint on firearms, and safety is key."

Passion for food and the will to get close and personal with its origins seem to matter more. A gun club meeting is rarely complete without a meat-oriented buffet, with the occasional abalone or seaweed feed thrown in the mix.

"Every event, members bring something they harvested themselves in the area and create mind-blowing recipes to share," says Jackson. In Ohio, where she grew up, such abundance didn't come as easy, and certainly not when it came to the wine.

"It's really homegrown and casual, a good introduction to country living," says Durban. "Our membership has this specific combination of old-time agrarianism, a streak of independence and creativity, a love of food and farming and an insider's view on the wine country lifestyle," adds Callimanis.

This lifestyle is a major draw for the city folk as well. Besides the core local members, the club also has members from San Francisco and Oakland, plus supporters in Los Angeles and Boulder, Colo. All of them, according to Durban, share an "independent spirit" and a knack for homesteading. And while members say they join for community networking and learning new skills, there's a healthy amount of social interest—friendships and even the occasional spark of romance are not out of the question.

For Carl J. Bowers, a paint salesman and musician from Rohnert Park, it's not about the activities or people alone. "The DCGC's core values are much like those that shaped my life throughout my Midwest upbringing, grounded with a strong moral compass, love of the outdoors and self-reliance," he says. For him, "semi-primitive camping, late-night talks at the campfire, eating to excess and a day at the gun range" is the dream ticket. Other monthly activities could easily satisfy a seasoned Midwesterner: turkey plucking, crawdad catching and bow making are good examples, but kombucha and gravlox workshops keep the California foodie spirit alive.

On the lighter side, there are festive "white elephant" parties, where members often surprise each other with beer holders and carving knives, and the "haunted barn" Halloween party, where a slightly ironic costume might be a turkey or a wild boar.

"At members' initiation, you have to drink from a gun-shaped [tequila] bottle. We went through the whole bottle already," says Durban.