And other fake news

Interim editor Daedalus Howell is the author of the novel 'Quantum Deadline' and writer-director of the feature film 'Pill Head,' both on Amazon. 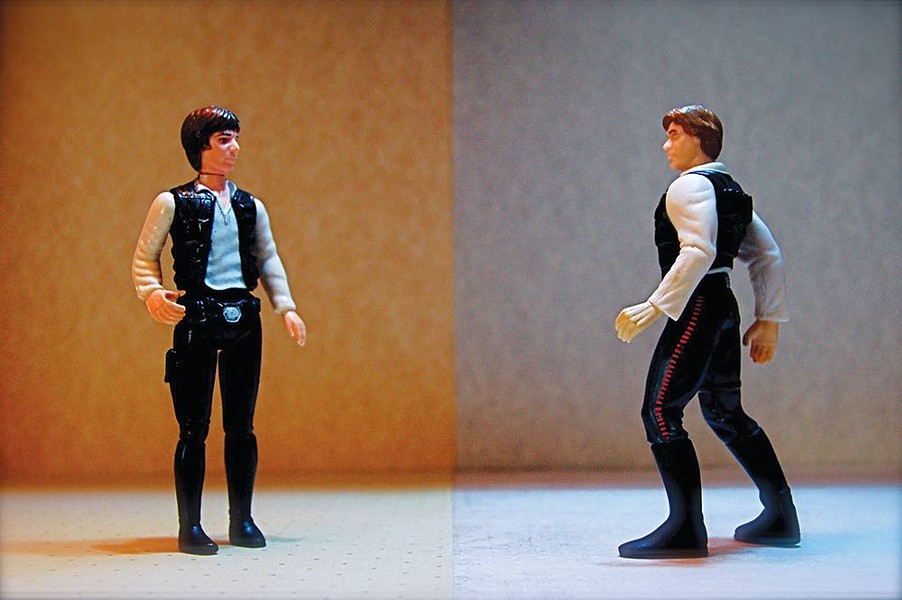 Han shot first. Every member of Gen X knows this because we were there—all of us—at the Coddingtown Cinemas in 1977—at least in spirit. This is how it went: Everyone's favorite space cowboy shot bounty hunter Greedo under the table. The end.

BUT subsequent futzing by creator George Lucas in later releases of Star Wars changed Han's M-O from mercenary to self-defense with the digital insertion of a preceding blast by Greedo. Lucas didn't stop there—he's rejiggered the scene at least four times, including the version in the new Disney+ edition now streaming to the chagrin of a generation.

Which is the definitive version of the scene? Which is truer to the character of Han Solo? Who cares? I do because the shifting sands of cinematic "reality" are a mere dress rehearsal for how our culture retrospectively contours the shape of its own history. Han Solo doing anything but shooting first is revisionism, an alternative fact—the real fake news.

It's also an object lesson in how the powerful manipulate culture for their own objectives. If you don't think Mickey Mouse is powerful then you haven't looked at copyright law in awhile—Disney's lobbying has systematically inched copyright duration toward infinity and beyond.

Now there's a new wrinkle in space-time—or as a science journal expressed to harrowing effect, the elemental structures of reality itself: what we consider the facts of the universe might actually be subjective. Gulp.

Published in the journal Science Advances under the scintillating title, "Experimental test of local observer independence" and co-authored by eight physics researchers (that's more credited writers than the WGA would allow on a Marvel movie, just sayin'), a recent experiment suggests (and this is a gross reduction to my own reading level) that independent observations of quantum phenomena can yield different factual results wherein "the objectivity of observations is not so clear .... two observers can experience seemingly different realities," reads the paper's abstract.

Back to this abstract paper: Quantum quandaries are weird because the observer affecting the observed is part and parcel of how they function. The tree falling in the forest doesn't make a sound unless someone is there to witness it. However, this eight-person "observer independence" gang is saying that's a subjective proposition—sure, the tree makes a sound but to you, it's a thud and to me, it's Monty Python's "The Lumberjack Song."

Suffice to say, they rigged the system for relativism. I mean, no one ever said, "To thine own self be factual." You're going to have to seek your own truth, Chewie. Same as it ever was. Even if Star Wars isn't.