Hands in the Air 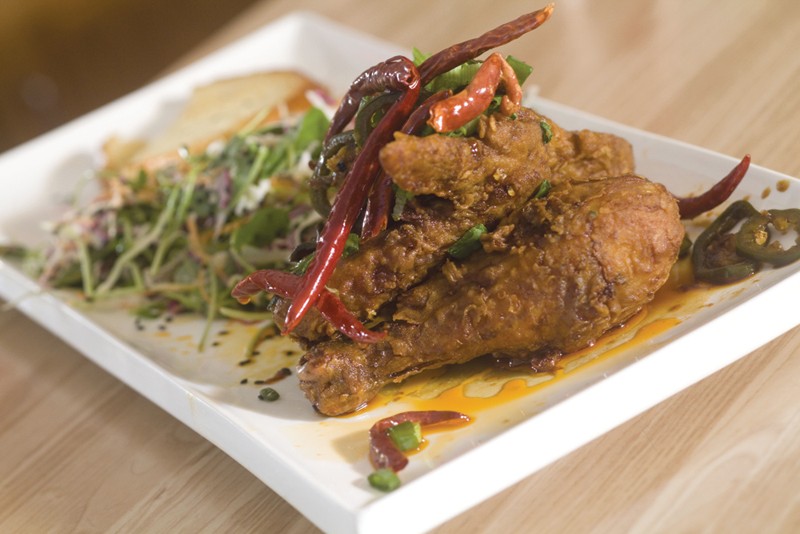 Recently, after an audition at a local theater company in one of Sonoma County's popular tourist towns, I was looking for a place to eat. It was a balmy spring evening, and as I walked from one restaurant to another, perusing the posted menus and sticking my head in the doors to check out the atmosphere, I realized that none of these white-tablecloth places were calling my name.

"We could go back to Guerneville," she responded patiently.

The next evening, we were back at Hi Five.

We ordered bibimbap—a rice bowl with vegetables, fried egg, seaweed, kimchi and a choice of protein—and giant beer-battered shrimp with sushi rice and a variety of Korean condiments. Our appetizer was a paper cone of hand-cut french fries, smothered in whole chili peppers, garlic cloves, seaweed and scallion rings. It was all deeply satisfying, as expected.

Those who haven't been to Guerneville in the past few months might be wondering what I'm talking about. The truth is, you could walk right by Hi Five without noticing it. That's because it's a dinnertime pop-up situated in the 1950s-style diner Pat's, where the Hines family has been serving breakfast and lunch since they purchased the place in 1943.

At 3pm, Pat's closes for the day and the Hi Five crew rush in to prep for dinner, stashing all the Pat's paraphernalia in a back kitchen and bringing out the Hi Five platters and condiments.

David Bloomster, who owns Hi Five with business partner and chef Eugene Birdsall, says he's had his eye on Pat's for years, and sharing the space with a dinner-only restaurant is a not-too-risky way to begin.

"It's so authentic," he says, noting its old-fashioned soda fountain, giant wall map of Russian River fishing holes and minimalist décor. "I could never have designed it myself."

Bloomster and Birdsall met next door at Boon Eat + Drink, one of the first major contributors to Guerneville's culinary renaissance. At the time, Bloomster was the manager and Birdsall was the chef. They worked together for four years, developing respect for each other's expertise.

Bloomster, whose background is in art and design, had an idea for what he calls a "postmodern" restaurant, where the setting is laid-back, the food is sophisticated, and the approach is about having fun. Birdsall, he decided, was the man who could pull this off, with years of hardcore experience and a fearlessness about which foods work together.

And it is working. So far, the restaurant is crowded every night, chock-full of locals, tourists from the Bay Area and day-trippers from Santa Rosa, Healdsburg and beyond. Clearly, there is something unique happening here, between the vintage décor, the '80s disco music (they will turn it down if you ask), the personable, intelligent waiters and the food.

Oh, yes, the food. Birdsall combines his intimate knowledge of the Korean dishes his mother cooked in Solano County with a whimsical appreciation of American comfort cuisine and an artist's sense of how to make food on a long, gleaming white plate look like a yummy still-life.

This results in everything from bossam—a lettuce-wrap plate with kimchi, garlic, chiles, rice, Korean soybean paste, a choice of tofu, chicken, shrimp or pork, and a huge mound of fresh butter lettuce — to mac and cheese with Korean-style beef short ribs and Asian garnishes.

Many of Birdsall's ingredients are locally sourced, including whole pig that he butchers each week in a back kitchen. His mother joins him to make the kimchi.

The menu is divided into five sections, priced at increasing increments of $5. Each section features five dishes, except for the last one, the weekly surprise.

Many of the selections are already vegetarian and/or gluten-free. The amazing Korean fried chicken (KFC) is dipped in rice flour, instead of the usual wheat flour, before frying, and then finished with a spicy soy-ginger mixture that is made from organic, gluten-free soy sauce. The noodle bowl comes with soba, udon or rice noodles, and meat or vegetable stock. Many of the entrées offer a choice of tofu, shrimp, chicken, pork or beef.

Bloomster, who has been a vegetarian for most of his adult life, is proud that at least half of the dishes can be prepared vegetarian-style, and that one even includes tempeh.

There's also a small selection of local wine by the glass, good beer and designer sake, all served from the bar.

It might be an exaggeration to say that eating at Hi Five could spoil you for other restaurants, but try it once, like my partner and I did, and you'll be back.