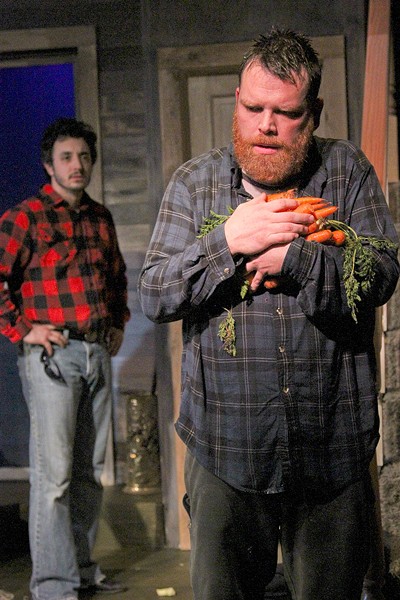 The choices in life that haunt you take center stage in two terrific local productions.

The family's decline can be traced to an event that is occasionally hinted at but never revealed—that is, until the arrival of grandson Vince (Sam Coughlin) and his girlfriend, Shelly (Ivy Rose Miller), who set in motion a chain of events through which the devastating secret is revealed and the family, perhaps, regenerated.

Good People, seen locally two years ago as the premiere production of Left Edge Theatre, is the tale of Margie (Sarah McKereghan), a down-on-her-luck Boston "Southie" who some would say has made a string of bad choices in life, though Margie herself might say she never had any to make. At the encouragement of her friend Jean (Liz Jahren), she attempts to reconnect with her old boyfriend Mike (Nick Sholley), now a doctor who long ago abandoned the projects of South Boston.

Margie, for whom the term "pushy" is an understatement, wrangles an invitation to a birthday party for Mike being thrown by his wife (Liz Rogers-Beckley, reprising the role from the Left Edge production), where she hopes to connect with someone who can offer her a job, but then the party is canceled. Or is it? Margie's gonna find out. It does not go well.

Funny, bleak and utterly real, Good People will have you nodding your head in recognition.