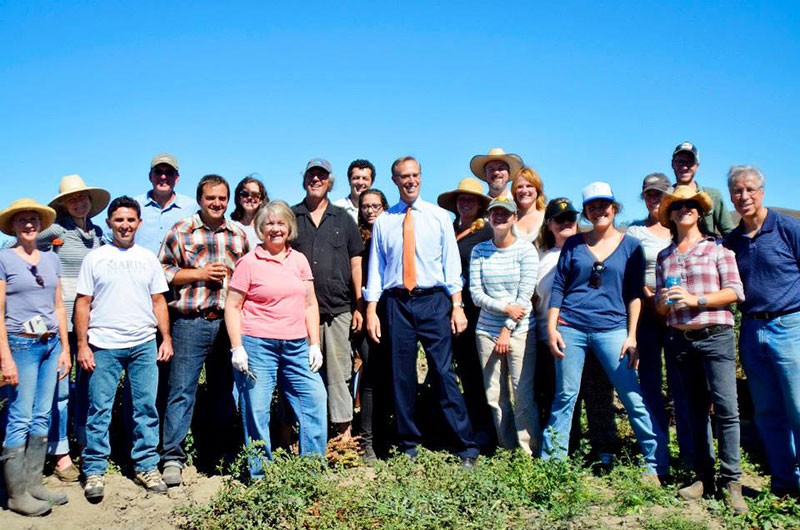 Nick Papadopoulos is a farmer now, but he has a professional background in conflict resolution. So, standing in a vegetable cooler on a Saturday night last March, surrounded by surplus produce that hadn't been sold, his mind began to wander.

"We had all this food that wasn't going to people," the general manager of Bloomfield Farms in Petaluma recalls. "It's edible and it's grown for the purpose of feeding people, and we don't make any money when it's wasted."

Later that week, he posted a message on Facebook advertising farmers market leftovers at a reduced price. That was the beginning of CropMobster.com, a social media hub addressing local farm waste and hunger—both issues hinging on a centralized, assembly-line food system that, according to Papadopoulos, is full of holes.

The terms "food waste" and "food access" fill national headlines, but connections between the two are rarely made. In September, the United Nations' Food and Agriculture Organization released a report claiming that each year "food that is produced but not eaten guzzles up a volume of water equivalent to the annual flow of Russia's Volga River, and is responsible for adding 3.3 billion tonnes [sic] of greenhouse gasses to the planet's atmosphere." Environmental damage aside, food producers lose an annual $750 billion on goods that feed no one. Meanwhile, 842 million people are hungry worldwide.

On a local scale, Papadopoulos saw the potential for overlap. A National Resources Defense Council study released last year states that waste occurs pre- and post-harvest, with variables like weather and labor shortages making it difficult to perfectly match a grower's supply and demand.

If farmers weren't making money anyway, Papadopoulos reasoned, why not discount those surpluses, or just give them away?

Gleaning operations, nonprofits like Respecting Our Elders and discount marts have come to similar conclusions. CropMobster aims to be a sort of virtual hub between such organizations and farms. Anyone can post an "alert"—a surplus of discounted blueberries, a need for gleaning volunteers—for free on its pages, which is then distributed via Twitter, Facebook, email and phone. For Papadopoulos, it's a way of synching up the small-scale, local food scene that by nature is more decentralized than the one created nationally by factory farms.

"We wanted to address food waste and loss, and help people who are hungry or just priced out of the good stuff," he says. "But we also wanted to help people in the cottage food industry and the gleaning industry, and build trading relationships."

"We're raising our families in Sonoma County, so we really need to be able to sell our produce at retail price," says Jennifer Branham, co-owner of the farm's CSA program. "But in the peak of summer months, when we have an abundance and are unable to move all of our produce, it's unique because it opens up other channels. So even though we only sold $1,000 worth of produce for $500—which doesn't make ends meet—they publicized us, which led to new customers."

She adds that Laguna's waste occurs mostly pre-harvest, in their fields. If the staff knows they'll have an abundance, they can't afford the labor required to pick their crops, so they let them rot. This fertilizes next year's crop, but it's another step in the food cycle where hunger could be met—which is where gleaners come in.

Suzi Grady is a program director for gleaning outfit Petaluma Bounty. The nonprofit connects farmers with abundance to low-income housing complexes and food pantries, and also maintains a network of community gardens and a farm. As a hub in its own right, Grady says the increased reach offered by CropMobster—thousands of eyes in 12 Northern California counties—has been helpful for commodities like produce, which are highly perishable.

"We need to mobilize very quickly when we get a call," she says.

With federal subsidies going primarily to large-scale farms, small organic growers often have to seek out a higher income bracket for their goods, which are not artificially cheap. Also, selling their leftover produce at lower prices could be seen as devaluing their regular inventory. Papadopoulos acknowledges this, but says he sees the potential for a wider market with surplus.

"That's the inherent conflict in the local food system," he says. "The farmers have to demand a premium price. Meanwhile people are struggling and farmers are struggling, and food surplus isn't being traded or exchanged or sold."