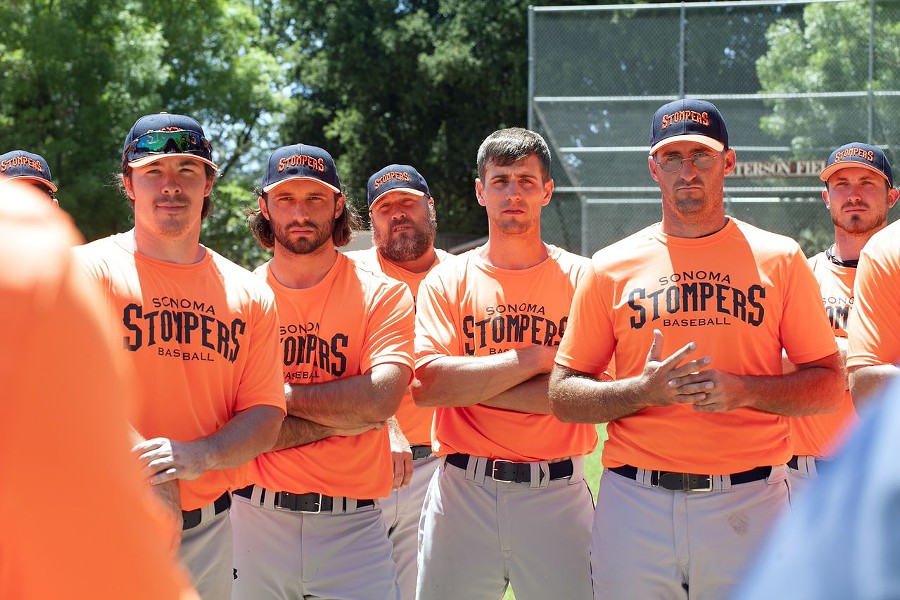 The history of baseball in the Bay Area goes beyond "Say Hey Kid" Willie Mays, the Oakland A's World Series "three-peat" in 1972–74 and controversial home-run king Barry Bonds. It extends beyond the broadcasts, bobbleheads and billionaire owners—and it started long before the Major Leagues even came to town. North Bay fans fondly remember the Sonoma County Crushers, the independent Rohnert Park team that ran from the '90s to the early 2000s and featured an ATV-driving Bigfoot lookalike as its mascot and a Major League MVP as its manager. But independent teams were playing here as far back as the 1930s, when the Sonoma Merchants entertained baseball fans around the Bay Area. They played games at Sonoma's Arnold Field and San Rafael's Albert Park. This summer, those parks will play host to a new era of North Bay baseball.

The Sonoma Stompers, an expansion team in the independent Pacific Association, are fixing up historic Arnold Field and will share it with high school baseball and football teams. The league has no connections to Major League Baseball and spun off from the larger North American Baseball League last year after beginning in 2012 with six teams. This year it includes four Bay Area teams: The Sonoma Stompers, San Rafael Pacifics, Pittsburg Mettle and Vallejo Admirals.

In the 1950s, "all the towns would play against each other," says San Rafael Pacifics general manager and co-owner Mike Shapiro. "Community-based teams would play on the weekends, and they would also play barnstorming teams." Those visiting teams included major leaguers like Frank Robinson, Billy Martin and Satchel Paige.

"This is the real heart and soul of baseball," he says.

"Being independent gives us freedom we wouldn't have otherwise," says Stompers general manager Theo Fightmaster. It's also a way to get around the San Francisco Giants' territorial rights granted by Major League Baseball, which dictates that MLB teams, including A, AA or AAA minor league teams, can't call the area home without the Giants' approval. The MLB recently quashed the Oakland Athletics' decade-long attempt to move to San Jose, a city even farther away from San Francisco than Sonoma, citing the Giants' territorial rights.

Between the drive, the parking, the ticket prices and the inevitable concessions, attending a major league game for anyone who lives north of the Golden Gate is an all-day affair that starts at around $100.

Independent teams, based in smaller markets, set their prices lower and plan fun and off-the-wall promotional events. At these games, rooting for the team is almost secondary to having a good time.

"I remember going to Crushers games, sitting right at the field, and when the game was over, 15 minutes later I'd be home and have no idea who won any of those games," says Fightmaster. "If you can be competitive and create a great fan experience, you're doing your job."

Tickets for Sonoma Stompers games at the 1,300-seat Arnold Field start at $3, and the most expensive seat is literally on the field, includes food and drink service, and costs $20. At 1,200-seat Albert Park in San Rafael, tickets range from $10 to $25, and should the nuances of a pitcher's dual in a scoreless game prove to be less than enthralling for younger fans, there are plenty of activities for kids like a separate Whiffle Ball park and between-inning challenges on the field.

As for promotions, creativity is the key. Pacifics media relations manager Vincent Espinosa says the team toyed with having a monkey throw out the first pitch this year, but the logistics might be too much to overcome. Last year, the Pacifics gave one lucky fan a casket, sponsored by a local funeral home, and during one game, umpires wore eye charts on the back of their jerseys, promoting a local optometrist.

This year, giveaways include shirts, beach balls and rally thongs, and there will be special appearances by Jose Canseco, Eric Byrnes, Jerry "the Beav" Mathers and, for the third consecutive year, "Spaceman" Bill Lee. Byrnes, 38, and Lee, 67, are former major leaguers who will play on the Pacifics on one-day contracts. Byrnes is donating between $500 and $100,000—that high figure is for a grand slam—to the Pat Tillman Foundation for each play he makes.

It's not all about gimmicks and former stars on one-day contracts. The players aren't millionaires complaining on Twitter about instant replay— they're mostly minor leaguers proving they've still got something left or former college stars looking for an opportunity to get signed by a pro team. The team finds them host families or shared rental spaces, and they make about $800 a month, says Fightmaster. "These guys are committed and devoted and understand that this is professional, this isn't a recreation league."

Joel Carranza, the Sonoma Stompers' power hitting first baseman, has been playing professional baseball for four years. Like all other players, he says, he has a job in the off-season. Carranza is an administrative assistant as an elementary school, a job he loves. But his first love is baseball. "We're out here, all trying to live the dream," he says after the Stompers' first-ever scrimmage against the Pacifics in Sonoma Sunday afternoon.

Not just anyone can walk on the field and play. "We're a little bit more scrupulous than people expect," says Fightmaster. "If you couldn't play in college, you probably couldn't play for us."

"Players in this league are really playing for the love of the game," he adds. "They understand that a big part of this level of baseball is community baseball."

In Sonoma, that means accepting that fans can walk up to a waist-high fence and ask pitchers warming up in the bullpen what they had for lunch. And it means being OK with wearing a dress for "A League of Their Own" night, in reference to the movie about a women's professional baseball league. And sometimes that means playing against guys who made it and made it big like Byrnes, who earned $10 million per year.

As for Carranza, he understands the nature of the league, and he's OK with the promotional nights. "It goes hand in hand with baseball," he says. "You've got to keep people into the game."

A pennant hangs in the Sonoma Stompers unassuming office in the city's town square. It's a pennant from the Sonoma County Crushers 1995 inaugural season, and it's in mint condition—as if the season started last week. "I put it up as a reminder of the legacy the Crushers left in Sonoma County," says Fightmaster, "and to try motivate us to try our best to recreate the great atmosphere they created."

The Crushers, who existed for eight years as part of the Western Baseball League, still evoke fond memories. Fightmaster says the comment he hears most when he talks about Sonoma's new team is, "You're bringing back the Crushers?" Well, not exactly. Instead of the Abominable Sonoman teasing the opposing team between innings, it will be Stomper the Bull, a mascot rescued from the former San Francisco Bulls minor league hockey team.

The Rohnert Park team had its share of fun promotions and former Major Leaguers, too. Former San Francisco Giant Kevin Mitchell, the National League MVP in 1989, signed on as a player-coach for the Crushers final two seasons, giving fans a chance to snag autographs and watch him hit the daylights out of the ball—and sometimes opposing players (he was suspended twice for the latter as Crushers manager).

The Crushers were always competitive. They won a league championship in 1998, and pitcher Chad Zerbe, who later went on to record a win in the 2002 World Series with the Giants, started out as a Crusher. Games were consistently well attended throughout the team's history, but the Crushers never played after the 2002 season when the WBL folded. Crushers Stadium, built in Rohnert Park in 1981 for the California League's Redwood Pioneers, was razed in 2005 for a shopping center that was never built, and attempts since then to bring baseball back to the North Bay have failed.

The Business of Baseball

Shapiro, who also co-owns the Stompers, knows the Crushers' saga well; as a lawyer, one of his clients was looking into buying the team, and Shapiro did a lot of research into the league. "Bob Fletcher, who owned the Crushers, did a terrific job of entertaining the fans and making it a great experience," he says. "But a league is only as strong as its weakest owner. If you have one weak owner in the league, it jeopardizes the entire league.

"What happens to a lot of these independent leagues is you get these owners who become absolutely enamored with the idea that they are going to be a baseball team owner, and they have no business being a baseball team owner," says Shapiro. "They get swallowed up by the whole sizzle of it and lose all their business sense."

Shapiro has been involved with MLB teams for decades, including a stint as counsel for the San Francisco Giants. "We've done a lot of thinking and a lot of smart things to ensure that the mistakes of the past aren't repeated."

"There's no 'business of baseball,'" Fightmaster says. "There's marketing, public relations, hot dog and beer businesses, and bringing those elements together creates the element of a baseball game." The actual sport is secondary. "We're not competing with the A's and the Giants in terms of product on the field," says the Stompers' general manager. "The product you see on the field is ancillary to the operation. You're creating an atmosphere."