New Pixar film takes a trip inside the tween mind 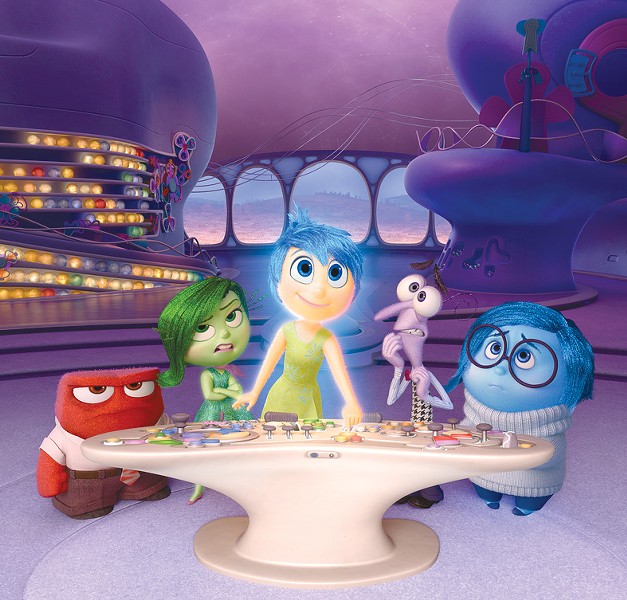 Pixar, the studio that tries harder than any of them, tries something different in Inside Out. It's a cartoon inner-space voyage into the subconscious, starring a cast of psychological abstractions.

Riley (voiced by Kaitlyn Dias), not yet a teenager, is uprooted by her parents from her idyllic Minneapolis home to a dingy Victorian in an authentically delineated San Francisco. We see the crisis disrupting her life from the inside of her personality. Riley's troubles are processed by five color-coded figures: the luminescent, blue-haired pixie Joy (voiced by Amy Poehler), who puts her seal on every event; Sadness (Phyllis Smith of The Office), a shapeless, bespectacled sloucher in a chunky white turtleneck sweater; Disgust (Mindy Kaling), green and scowling with disdain; and, lurking like minions, Anger (Lewis Black) and Fear (Bill Hader).

Joy's job is to collect and protect memories before they're sent to the core. The newly minted memories are the size and color of glow-in-the-dark bowling balls, which roll down ramps of mammoth machinery to be safely archived below decks, before sadness can touch and cloud them.

For all the mulling over of emotional conflict, Inside Out is as restless as any summer action film, with both a rocket journey and a train wreck. The amusement-park-like "islands" of Riley's inner-life (one, a "Goofyland," is where Riley goes when she pretends to be a monkey to cheer her dad) crumble under the girl's stress, shaking as if they'd been built on a psychological San Andreas fault.

Co-director Pete Doctor is trying for something funny and also profound. He mostly succeeds. And once again, Pixar gets you right between the ribs, this time with a scene of reconciliation—when Riley comes to understand that there is something called bittersweetness that dwells between the extremes of joy and sadness.

'Inside Out' opens June 19 in wide release.

Movies Inside Out Pixar Pete Docter