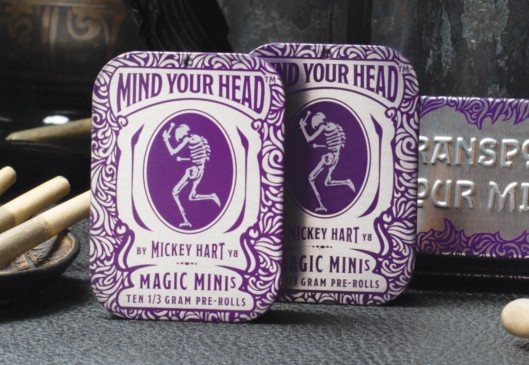 On her hit single, "White Rabbit," Grace Slick told stoned audiences, "Feed Your Head," though they needed little encouragement. Fans of Jefferson Airplane and Jefferson Starship expanded their minds with various narcotics, too. Now, Grateful Dead drummer extraordinaire and long-time Sonoma County resident Mickey Hart has created his own cannabis brand called "Mind Your Head." It sounds like a spinoff of "Feed Your Head," though with a bit more emphasis on mindfulness and consciousness, not on the idea of following a White Rabbit into a drug-induced Wonderland.

The first product from Mind Your Head is a tin with 10 one-third gram pre-rolls called "Magic Minis." Naturally, there's a drawing of a skeleton on the cover created by Hart. This one is running—he's not a couch potato—and he carries two drumsticks, one in each hand. The press release from Mind Your Head doesn't actually say that Hart has smoked pot. What it does say is that the pre-rolled joints (is there another form than pre-rolled? Why not just call them joints?) seek "to share an essential part of the inspiration behind his [Hart's] work as a musician and artist."

The enterprise is a partnership with Left Coast Ventures and features the Chemdog strain, named after the man who reportedly discovered the strain outside a Indiana Dead show in 1991.

In spite of Hart's corporate backing, Magic Minis could be a case of too little too late. Willie Nelson has his line of pot products and so does Francis Ford Coppola. Indeed, pre-rolled, dispensary-sold cannabis cigarettes have been around for years. Sonoma County's Garden Society has been making theirs and distributing them all over California. The company has built up a loyal following, though there's no famous name behind it, and has succeeded in attracting middle-aged, professional women to their products.

Still, the product launch is further evidence of the mainstreaming of the once-black market industry.

Jonah Raskin is the author of Marijuanaland: Dispatches from an American War.