The Diaz dynasty: Molé, Agave and a whole lot of corazón 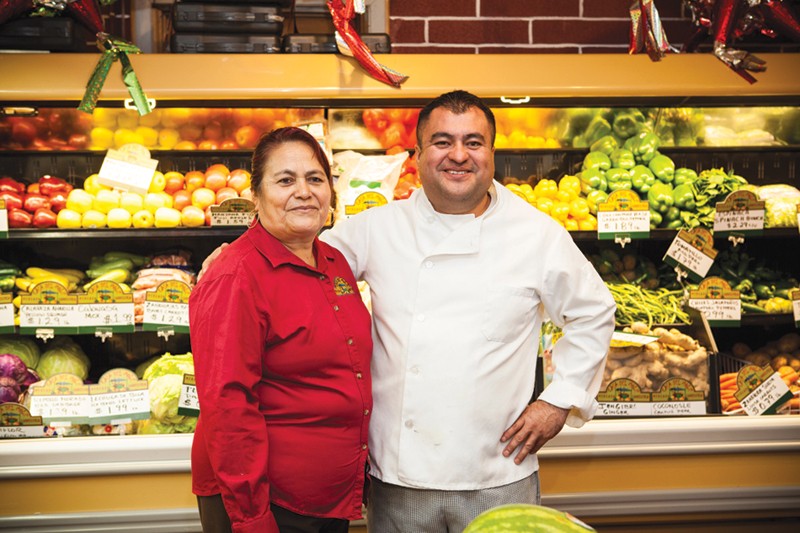 When he was just five years old, Octavio Diaz was burned by a kettle of hot milk while watching his mother make hot chocolate over their open-flamed adobe oven. Despite the pain to his chest and arms, Diaz stuck by his mother's side, absorbing her techniques, her recipes—and mostly, her passion.

"We are the first generation of men in my family who love to cook," he says of himself and his brothers.

For the past decade, the Diaz family has steadily climbed the culinary ladder in Healdsburg, where they now own two restaurants and a market. Diaz's brother Pedro runs El Farolito on Plaza Street, having started as a dishwasher eight years ago; his youngest brother, Francisco, runs a second location in Windsor. On Cinco de Mayo 2010, Diaz opened Agave Restaurant & Tequila Bar in Healdsburg's Safeway shopping center, a location that belies the restaurant's gastronomic sophistication.

And just this past August, with a music- and masquerade-filled celebration, Diaz opened Casa del Molé Mercado y Carniceria on Center Street (formerly Los Mares), named for his mother Juana's increasingly famous mole negro, which she makes from scratch weekly. Every few months, Diaz's parents return to the Zocalo market in their native Oaxaca to procure several of the 32 total ingredients—which include plantains, walnuts, animal crackers, chocolate, and a variety of chiles—that give mole its distinct flavor.

Passed down through four generations of Oaxacan women, Juana's unique recipe contains no lard or sugar, though she does use local Gravenstein apples and golden raisins for sweetness. The entire process takes about three days, from the first roasting of the chiles to the final jarring of the sauce, which is available for purchase at Casa del Molé ($12.99 for a 16-ounce jar). "One of our secrets," Diaz confides, "is to remove all the seeds from the peppers, because they are bitter. It takes a lot of work, but it's worth it."

Hard work comes naturally to Diaz, for whom success is the only option. "I cannot fail," he tells me matter-of-factly. As the oldest of seven siblings, he feels the pressure of being a leader for his family, many of whom have gained citizenship over the past decade, and whose generosity made his restaurant dream a reality. "In this economy, our family is our bank," says Diaz, "which allows us to stay out of debt and not pay interest."

When he was 13 years old, Diaz left Oaxaca to live with his aunt and uncle in Rohnert Park. During high school, he worked as a busboy at the Red Lion Hotel (now the Doubletree), where he met a hostess and college student named Nancy. "I used to ride my bike to SSU from Rancho Cotate to see her," Diaz says of the woman who's been his wife since 1997. Red Lion proved auspicious in another way as well. "That's where I discovered my love for hospitality," he says.

Though Diaz toyed with the idea of being a teacher, one semester of teaching a beverage-management class in the SRJC culinary program convinced him otherwise. "It was very hard," he admits, "and I realized I wanted to stick with restaurants instead. I have the highest respect for teachers," says Diaz, who credits the SRJC with helping him achieve his goals.

When it comes to food, Diaz is committed to bringing more vegetables into Mexican cuisine. Casa del Molé's produce section is even bigger and more colorful than the pastry case, and Diaz gets as excited about cabbage as he does about their homemade chorizo and goat stew. "It's like having our own farmers market," he says of Casa del Molé, which supplies all three of the Diaz restaurants, "but it's open every day."

Even though Agave offers standard taqueria items like burritos and nachos, it's the traditional Oaxacan food that Diaz is most proud of: molotes, deep fried masa stuffed with potato, chorizo and herbs ($10); pollo asado, grilled chicken that's been marinated in a secret sauce de la casa ($11); tlayuda, a corn tostada topped with beans, cabbage, avocado, salsa and queso fresco ($10); and of course, the molé de Oaxaca, served atop chicken ($13) or enchiladas ($12). True to its name, Agave also offers a huge selection of tequilas and mescals, many from family-run distilleries in remote Oaxacan villages.

Like Agave's menu, Diaz's world straddles the old and the new. Though he comes from a family of seven siblings, he is stopping at two when it comes to his own kids, in part, he says, "because I want to give them the best life possible."

He is an intrinsic part of the Healdsburg community, greeting nearly every other person he sees as we walk from Agave to Casa del Molé on a recent Thursday afternoon. But his ties to Oaxaca, where his grandmother still lives, remain strong.

"Part of my motivation to work hard is to make my grandma proud," he says, "because we are like the harvest of her hard work."