Nearly every way to drink, dance and kiss your year away 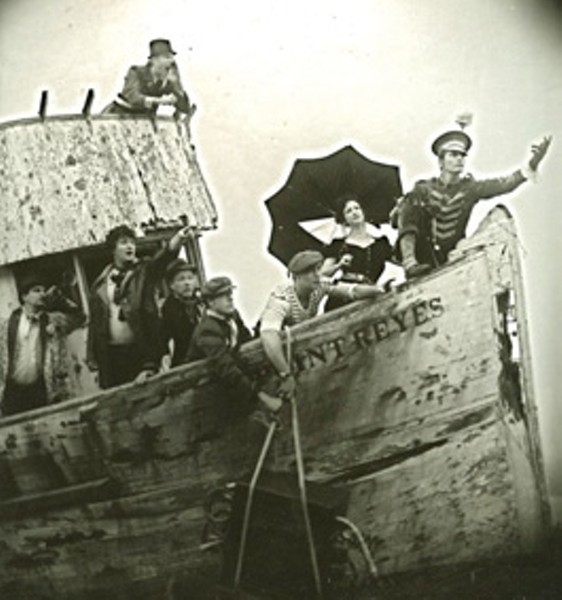 AVAST: El Radio Fantastique, unofficial winners of "press photo of the year," play off the last 12 months at the Woods in Mill Valley.

The tax bill, the election, the DREAM act, Sarah Palin's Alaska—sheesh! When even Scarlett Johansson and Ryan Reynolds break up, you know it's time to throw in the towel on 2010 and kiss the year goodbye. Here's a ton of ways to make the turning of the calendar an intoxicating, confetti-filled, high-kicking, get-down relief.

Let's start during the day—early in the day. In Santa Rosa, it's basically part of city law that before tucking in every night, everyone's last thoughts will be, what would Charlie Brown do? Simple: attend the Schulz Museum at 10am and have a root beer toast and balloon drop at noon—the "other" 12 o'clock. Why root beer? It doesn't make sense? Of course it all makes sense! It's for the families and sobriety. See how it all works together?

Sure, we often wake up on New Year's Day thinking, "What is this beast sleeping next to me?" For a truly unforgettable New Year's Eve, Safari West is making that question quite literal with its second-annual Romp with the Beasts party. For $100, guests can dine, dance and drink the year away at a party befitting the wilderness; or, for $377, two adults can do all of the above and spend the night with wild animals in a luxury safari tent-treehouse with full accoutrements. Morning breakfast consists of mimosas and a walk with the exotic wild animals. No, it's not a joke! Yes, it's advance-reservation only.

The Chicago Sun Times called him "a tremendous talent with a poet's soul." We call him our longtime homeboy who just keeps getting better, especially with this year's record Between Motion and Rest. On New Year's Eve, Eric Lindell brings his unique brand of country-infused jazz to his stomping grounds at the Forestville Club, one of Sonoma County's favorite dive bars, for just $35.

Blues hounds can open wide and pop some beer bites to the free electric vibe of the Aces at the Russian River Brewing Company. The band's many interests include spontaneous human combustion—a scientific possibility—to go along with New Year's fireworks. By the time New Year's Day arrives, you might end up wondering where all that heat is coming from. Hint: it's the Aces, combusting all over 2010. (Yes, you just read that.)

If 2011 promises an upswing in the economy, let's hope for an upswing in world peace as well. Sebastopudlians channel their inner gods and goddesses for the New Year's Eve Dances of Universal Peace at the Sebastopol Community Center. A $20 admission gets you sacred circle dancing, singing and more peace on earth than a Bing Crosby and David Bowie duet.

One can experience the redwood forests and Gulf Stream waters without ever having to leave Petaluma on the big night. The Cinnabar Theater celebrates the new year with the opening of 'Woody Guthrie's American Song,' last seen in flash-mob form at the local Whole Foods Market. Featuring two dozen of the beloved folk musician's songs, the show is a musical journey into American life. And with tickets only $35, who wouldn't want to tag along? The show runs through Jan. 23, but before the opening performance, a New Year's Eve gala gets attendees in the spirit with dessert, Champagne and some dancing tunes for $60.

In Petaluma, celebrants can welcome 2011 with a greasy-plate helping of the blues with a side of rock. For $50, the bash at the Mystic Theatre in Petaluma features the Tommy Castro Band as they play a special 20th anniversary show with founding members Randy McDonald and Shad Harris, as well as Billy Lee Lewis, playing songs from every record they've ever recorded. NorBay winners Frobeck open with their unique coleslaw of rock and pop.

Twenty-eleven goes strip-style for Viva Las Vegas at Chrome Lotus in Santa Rosa with DJ Beej and John Huntington. The night includes music, dancing, drinks and a balloon drop—but wait, there's more! If you make your way through the balloons and find the "golden ticket," you win a trip for two to Las Vegas, which includes a stay at the Palms resort, a tour of Sin City with the owner of Huntington Ink, and returning to California with a brand-new tattoo. For reals.

Valley Ford's Rocker Oysterfeller's has not only a name that's fun to say, but a $65 four-course dinner featuring Dungeness crab as well as options for the non-seafoodies. After dinner, guests can wander across the street to the Fish Bank where DJs will be spinning dance tunes with a full cocktail bar as well as an oyster and caviar bar for just $10.

Out in Guerneville at the recently renovated River Theatre, there's a quadruple bill of Stone Crow, Broken Ties, Ice and Wasted Morality. Just kidding! Those are all bands from 1986. But to those who used to frequent the theater when it was a haven for metal and punk bands, the news that Jerry Knight this year bought the building and fixed it up is a tug on the sentimental heartstrings of the hesher world. The big New Year's Eve party this year features Peggy Day & the Gypsy Knights, the Detroit Disciples, the Samuka carnival dancers and the Buddy Owen Band. At just $15, it's a great way to check out the hallowed hall in its reopened glory.

Sebastopol's Hopmonk Tavern features Melvin Seals and JGB in homage to the greatest nine-and-a-half-fingered guitarist that ever lived with a full balloon drop and, in a distinctly brewpub-style twist, an IPA toast for just $40. Take that, Dom