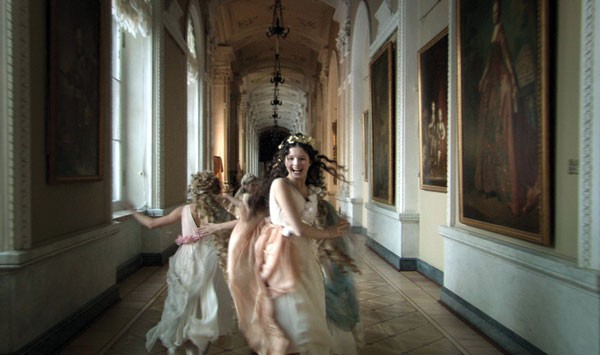 A 10-year-old film is our key recommendation at the Wine Country Film Festival. The festival also includes the Clara Schumann bio-pic Clara, the documentary Gypsy Spirit, on the Rajasthan roots of the music that spans the European continent and beyond, and "Films al Fresco" at the Deerfield Ranch Winery in Kenwood.

Russian Ark (2002) follows a pair of ghosts, unstuck in time, visiting the Hermitage in St. Petersburg; it's the cultural pride of the Russian people, but it's also tied irrevocably to that nation's history of despotism and terrible war. Director Aleksandr Sokurov captures this in one single, audacious 96-minute take. ("No cut = director's cut," Sokurov jested at the time.) It's shot with a Sony HDW-F900 camera, equipped with a then-prototype disk drive built to record for 100 minutes. Cameraman Tilman Büttner (Run Lola Run) negotiates the turns and stairwells of the palace. But the feat of setting up, in essence, 33 studios to be entered in real time is less important than the film itself.

We don't learn much about the freshly dead—or perhaps deeply dreaming—narrator, but his companion is called the Marquis (Sergey Dreyden). As a foreign observer, the Marquis tempts out the question of the history and destiny of Russia. He whispers as he sidles past Catherine the Great (Maria Kuznetsova). And he's delighted by the garb at a lavish Victorian ball, with marabou plumes, mauve gowns and coronets. "Beautiful uniforms, even if I don't like the military," he says.

Seeing this nexus of history and art, you quite forget what a technical breakthrough Russian Ark was until the grand final procession, a ball letting out into the chill of dawn—and of course, letting in the Great War and the Russian Revolution. Here, the Hermitage is the point of calm in the torrent. It's 300 years seen "in one breath," Sokurov says. Certainly, it'll take your breath away.