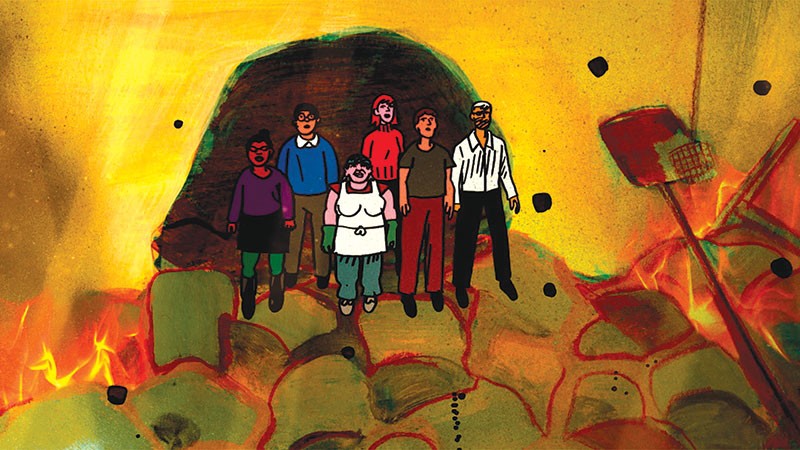 Dash (voiced by Jason Schwartzman), the hero of the animated teen comedy My Entire High School Sinking into the Sea, is a hard-hitting reporter for the Tides High Gazette, the Xeroxed student newspaper. The Gazette's editor, Verti (Maya Rudolph), is trying to split up the friendship between Dash and his best pal, Assaf (Reggie Watts).

Verti, in turns out, is trying to get Assaf for herself. An upset Dash turns his attention to the new school auditorium and the apparent forged signature on the inspection permit. The place is dangerously unsound—built on a precarious cliff over the ocean and ready to collapse at the first small temblor.

When it strikes, 900 students are soon floating off to sea. Enraged by spilled blood-transfusion bags from the nurse's office, man-eating sharks pick off the kind of kids no one can seem to remember and no one will miss. Meanwhile, Dash, Assaf, Verti and their new nodding acquaintance, Mary (voiced by Lena Dunham), make the torturous trip up to the higher levels, the inner sanctum where the seniors are cowering.

The school's crisis produces a hero in Lunch Lady Lorraine (Susan Sarandon), a wise woman with cross-hatched hair net and a tragic back story. She bucks the kids up, nurses a jellyfish sting by boiling the stung kid's elbow and kung-fus the school's bullies when they try to push the bad situation into anarchy.

It's a veritable Poseidon Adventure for a new century. The school may be wet, but director Dash Shaw's writing style is dry, having the tang of brilliant, bored high-school-kid comedy. Tracing the outline of a disaster movie, as Shaw does, picks up the central messages of the genre: there is no such thing as a tragedy that isn't the result of corner-cutting. Be stalwart, but be nice, the film says, and the wheel of fortune will render today's shiniest and most important pig into tomorrow's bacon.