Local hops lacking, but not for lack of trying

Six feet tall and totally useless, there she stands—or has managed to climb, before giving up.

It isn't that she's wilted in this summer's relentless heat; though red and brown may fringe her leaves now in September, they're still as prickly and deep green as in midsummer—and I should mention here that I only say "she" because the most desirable hops, the fragrant, light-green, cone-like flower buds that are used in brewing, are produced by the female Humulus lupulus plant. No letters, please. I suppose it could be a dude. It sure is a dud.

When I planted three hop rhizomes in 2015, the other two of which checked out completely this spring, I was hoping for an easy home-grown addition to my homebrew, just like the hop I planted some years ago that kept producing bumper crops of spicy green cones with no input at all, even as my interest in home-brewing waned.

I returned to the hobby with better knowledge of the hops used in the English beer styles I wanted to brew—hops like this Golding, which should have grown to 15 feet or more by late July, but didn't offer me a single cone.

Brewmaster Jesus Ceja had high hopes for Saaz, a Central European variety that contributes a spicy character to classic pilsners, when he established a 20-foot-tall hop trellis at Carneros Brewing Company. Having 15 years experience brewing pilsner styles around the world for Anheuser-Busch, Ceja knew where to get a quality hop: a ranch on the U.S.-Canadian border.

The first year, the hops grew well. The next few, not so well. Finally, they had to rethink the project. It wasn't the growers—it was the hops, and the climate wasn't to their liking. Now Carneros Brewing is replanting with varieties better suited to California.

Good news: maybe I don't have to blame myself for that dismal Golding?

"I've torn out as many as I've planted," says Paul Hawley, co-founder of Fogbelt Brewing Company in Santa Rosa. Hawley planted a quarter acre of hops on his family's property in Healdsburg, which is mostly in vineyards. Like wine grapes, hops thrive in the temperate climate of Northern California. But results may vary because of their sensitivity to chill hours and day length—and with some varieties, those results are nil.

Hawley has had no luck with Centennial, for instance, a variety he describes as "very tricky." In major hop-growing regions like eastern Oregon and Washington state, notes Mike Stevenson, president of the NorCal Hop Growers Alliance, hops get more daylight hours during summer solstice, exactly when they need it to set a big crop.

But while they get twice the yield in Washington state, the payoff for North Bay growers is in uniquely flavorful hops.

"It's still thought of as a commodity," Hawley says of the role of the hop in brewing. "But really it is not—it's more like grapes. It's going to change depending on where and how you grow it."

The popular Cascade hop, for instance, tends to show citrus and pine aromas when grown in Washington, notes Stevenson. In Sonoma, adds Hawley, "the Cascade is more floral." Even then, the Cascade grown at his hop yard has a distinctly melon note compared to others, according to Hawley.

Samples of Fogbelt's saison, pale ale and IPA brewed in advance of their wet hop festival in early September did, indeed, show more tropical fruit notes than typically bitter or "hoppy" aromas. "It's not about hitting you in the face with hops," says Hawley. "It's more about experiencing the aroma and flavors." 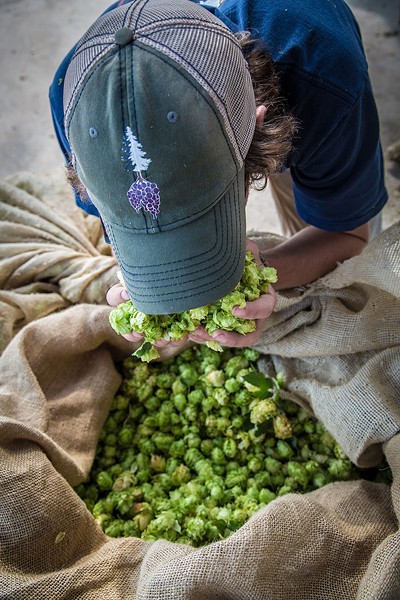 The Alliance formed in 2016 to help share hop-growing knowledge over a few beers. Dues-paying members include more than a dozen farmers with more than 50 plants, hobbyists and owners of related businesses. A collaboration with the organic chemistry program at Sonoma State University is helping them to dial it in further by analyzing samples of alpha acids in hops grown in different soils.

A sandy, well-draining soil is best for growing hops, say Hawley and Stevenson, and while the outlook isn't always entirely hopeless for finicky varieties, they name three foolproof choices for the home grower: Cascade, Chinook and Columbus.

Another good bet, California Cluster, was found growing wild along the Russian River. Having been left to its own devices after the hop industry abandoned the region in the 1950s, this wild sister is particularly well adapted to the climate. But it's hard to locate.

And don't forget to allow plenty of room for the hop to grow up to 15 feet—if you've got high hopes.